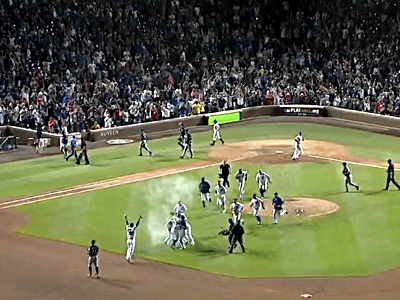 It’s incredible to think that I’m still going to have so much more to share and discuss from this ridiculous game even after that headline right there. This isn’t everything from a crazy game, but is the absurd and sublime ending.

To set the scene, it was the 12th inning, the Cubs were basically out of players, and Jason Heyward led the inning off with a double that was inches shy of being a walk-off homer. He took third on a sacrifice fly – some excellent baserunning – and the Cubs had Hector Rondon scheduled to bat from there. Instead, Jon Lester came up and took some hacks.

Then, with two strikes, he shocked everyone and did this:

That was perfectly executed, and the Mariners basically had no chance to retire a streaking Heyward down the line. Gotta love Heyward’s helmet chuck, and Lester’s teammates tearing the jersey off of him in celebration. And someone exploded a rosin bag on Lester, too.

Here’s how it looked from the bleachers, with me losing my mind: