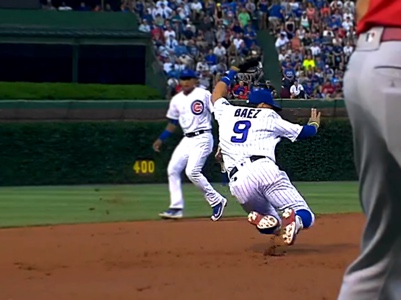 Chicago Cubs infielder/magician Javy Baez did not start yesterday, which meant we were all deprived of the incredible defensive play he certainly would have made if he were out there.

Thankfully, he did start tonight, which means we got to see him do as he does.

It didn’t take long, as Albert Pujols stepped to the plate in the second inning, and roped a 101 mph shot to Baez’s left. Surely the ball was ticketed for the outfield, except:

And the GIF version:

That is such an incredibly difficult play, to react that quickly and follow the ball up on the short hop. So difficult.

Well, for anyone not named Javy Baez, anyway.