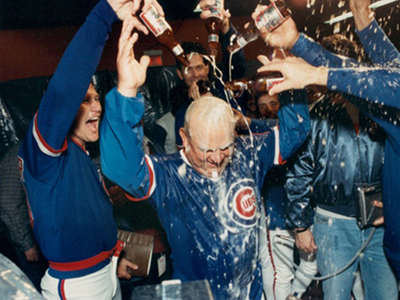 The (second-place) St. Louis Cardinals are coming to town for a long four-game series at Wrigley Field, so I thought it’d be worth taking a quick dip into the Cubs recent hot streak and the various playoff odds in the NL Central.

It’s not quite a full off-day check-in, but the Cubs have won a lot of games lately, so let’s see where that’s left them.

Since the end of the All-Star break, the Chicago Cubs have gone 18-6, pushing their record up to a season-high 30 games over .500 (71-41). During that stretch, they played a few really good teams (Rangers, Mariners, Marlins), a couple of mediocre teams (Mets, White Sox) and several bad ones (Brewers, Athletics and Angels), but they won eight out of the nine series, including their past nine games in a row.

In fact, thanks to some handy investigatory work from Adam B. (@SouvenirCity – definitely give him a follow), we learned that this is just the fourth nine-game winning streak (for the Cubs) this century (2001, 2008, 2015, and 2016). If they win tonight, well, we’ll tackle that streak if and when it happens.

Suffice it to say, a winning streak of this length is relatively rare for the North Siders and has done wonders for their odds and standings.

Coming into play today, the NL Central looks like this:

While their .634 winnings percentage – also the best in baseball – puts them on pace to win about 103 games, projecting the rest of the season is a bit more complicated than that. FanGraphs Depth Charts, for one example, is projecting a 30-20 finish in their final 50 games (101 wins), while BP’s PECOTA is projecting a 29-21 finish for an even 100 wins. If any of the three scenarios above occur, though, the Cubs will take the NL Central with ease.

As you can imagine, then, their odds of reaching the playoffs look quite good.

At FanGraphs, the Cubs’ odds of winning the NL Central currently stand at a stark 99.7%. Given the presence of two Wild Card spots, you can understand, then, why their chances of making the playoffs – are you sitting down? – sit at 100%. It’s funny how at, say, 99.7% you’re reaction is like “Wow. Okay, as long as they don’t mess this up, we should be good.” But at 100%, there’s nothing to do but laugh. 100%. There’s a 100% chance the Cubs are making the playoffs. It’s just silly.

At Baseball Prospectus, expectations are nope, they’re exactly the same. A second, completely independent and uniquely calculated measure has the Cubs odds of winning the NL Central at 99.8% and their chances of reaching the playoffs at an even 100%. [Brett: Obviously it’s technically possible the Cubs miss the playoffs, so I wonder how many decimal places you’d have to go out to get the non-100% number … 99.99% 99.999999999%?]

Of course, that’s not all. At FanGraphs, the Cubs are thought to have a 19.4% chance of winning the World Series, while Baseball Prospectus has it up over 20.0%! (20.3% to be exact). Essentially the Cubs have a 1 in 5 shot of doing the very thing you’ve spent your entire life fantasizing about.

To that, I don’t have much of a reaction. I mean, what can I possibly say to contextualize the fact that the ultimate, most sought-after and longed-for occurrence in sports has a better chance of happening this season than it has in quite some time.

I guess I’ll leave you with one thought: just enjoy it while you can.