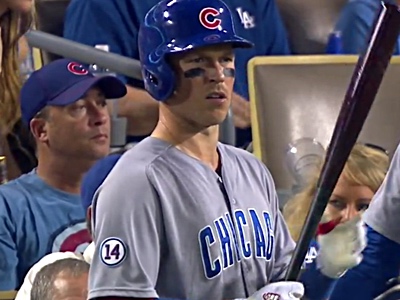 Last night’s Cubs victory over the St. Louis Cardinals was just so unusual – well, not the fact that they won, but just how they did it.

Already, we took a look at the walk-off walk from Anthony Rizzo and the string of in-your-face plays from catcher David Ross, but I’m not sure if either of those were even the strangest part of the night.

No, that honor will definitely be awarded to Cubs outfielder Chris Coghlan.

With two outs and the bases loaded in the bottom of the sixth inning, the Cubs found themselves down two runs and down to their last strike of the frame. In fact, Coghlan had worked the count full, so the next pitch was going either going to be something extremely fun or extremely frustrating. Having long supported his spot on this roster, even Brett was feeling the heat:

Well, Chris, here's your chance. For both of us.

And then Coghlan called for timeout … or he didn’t … or he did, but it didn’t count and he sent a rocket single into right field for a game-tying two RBI:

After the game, Coghlan spoke to reporters (Cubs.com), citing Martinez’s tendency to quick pitch. “I called time and then I put my hand up and said, ‘Time,’ and looked back at [Kulpa], and he popped up but I saw he wasn’t going to give it to me. I just reacted. The only thing that popped into my head was that I’m not going to go down taking it.” And he didn’t!

Coghlan cocked back and connected on an off-speed pitch, taking it into right field for a base-hit:

As you can imagine, Brett was relieved … and obnoxious:

Everything is wonderful again.