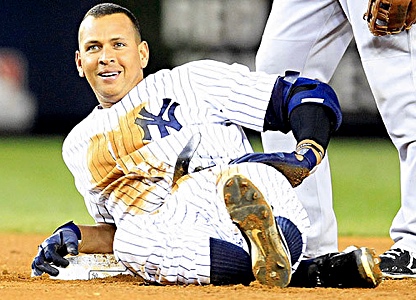 UPDATE: So much for that:

"I want to put all this talk to rest about Alex playing for any team this season. It's not happening."–
ARod spokesman Ron Berkowitz

Too bad for the fun-wanters among us. Original post remains below.

You knew that if a team was willing to bring on Alex Rodriguez after the Yankees released him, it would be the Marlins.

And it is the Marlins, at least accord to Jim Bowden:

The move comes a day after the Marlins learned that slugger Giancarlo Stanton is probably out for the year with a serious groin injury.

… which is hardly to say that Rodriguez, 41, can replace Stanton’s production. After a solid year in 2015 as the Yankees’ DH, Rodriguez has fallen off the map this year, hitting just .200/.247/.351 (55 wRC+), showing terrible regression in every part of his offensive game. For a guy in his early 40s and twice busted for PED use, I would say a sudden and steep decline is to be expected, and probably will not reverse course at this point.

Maybe the move energizes Rodriguez a bit, and maybe he hits reasonably well the rest of the way. The Marlins already have a very good-hitting first baseman in Justin Bour, who has been out since early July with an ankle injury. Still, he’s expected back eventually, and I suppose could platoon with Rodriguez. Of course, then the Marlins will have a first base duo of guys who cannot play any other position – not easy to pull off in the NL.

Speaking of which, Rodriguez has not played in the field regularly since 2010, and the sporadic play he had at third in 2011 and 2012 was ugly. First base is a little easier, of course, but, I mean, he hasn’t played defense in years.

This is all interesting from a pure pageantry perspective, but it also matters for the NL Wild Card race, where the Marlins are battling primarily with the Cardinals for that second Wild Card spot. The winner of the Wild Card Game could very well be the team the Cubs face in the NLDS.