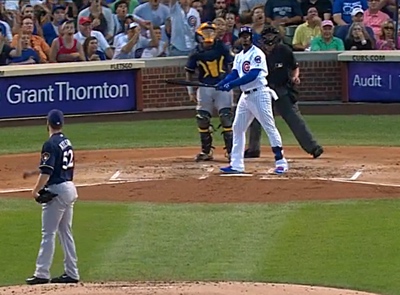 Remember when Jorge Soler was having a really rough start to the season, despite solid walk and strikeout rates and a decent ISO?

Your answer should be: “barely.”

Because all Soler has done in the month before he hurt his hamstring and then the couple weeks since returning from it is obliterate the ball.

For example, in the process of the Cubs batting around in the first inning against Jimmy Nelson, Soler just did this:

Sure, Jorge watched that one a bit, but he earned it: that shot went out at 107 mph, nearly reached the video board, and wound up 450 feet of three-run goodness.

Soler was rightly very happy about his blast: