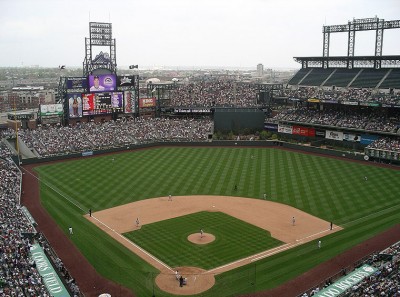 The Chicago Cubs have won four in a row after their previous 11-game winning streak was halted by a couple bullpen hiccups. With Hector Rondon off to the DL – and John Lackey with him – the Cubs may have a tougher time keeping the good times rolling on this West Coast swing.

Kyle Hendricks has arguably been the Cubs’ best pitcher this year and, in theory, his low-walk, groundball, weak contact tendencies should play well at Coors Field – or as well as any pitcher can hope. The reality is, sometimes dudes just get blown up here. It happens. Don’t stress if it does to Hendricks tonight (or Montgomery/Cahill tomorrow, or Hammel on Sunday).

That’s not just because of the Coors Field effect, mind you – it’s also because the Rockies, individually, hit so freaking much better at home than on the road. Almost to a man, these guys don’t just have strong home/road splits, they have INSANE home road splits.

Hendricks will be opposed by Tyler Anderson, a young lefty who has been pretty darn good this year, all things considered. Heck, he has a better xFIP than Hendricks (though we know that doesn’t quite capture all of Hendricks’ ability). Anderson will see a whole lot of righty Cubs bats, so it should be a challenge, as he has pretty decent L/R splits. He is – as you would suspect -slightly worse at home than on the road.