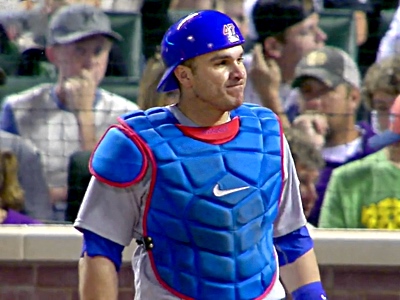 You’ll have to forgive me the extra day in between the play and the sharing, but I was waiting for this video to be available.

On Saturday, Trevor Cahill struck out Ryan Raburn with a nasty knuckle curve, which hit the dirt, then Miguel Montero’s glove and shot up in the air toward the backstop. It was to be yet another dropped third strike resulting in a baserunner – it seems to have happened way too much to the Cubs this year – and a haunting echo of what happened in game three of the NLDS (Cahill whiffed Michael Conforto on a nasty knuckle curve, it was a dropped third strike, Yoenis Cespedes scored the lead run on the play, and the rest was history).

But this time was different. Well, OK, mostly because the stakes were nowhere near as high, but also because Miguel Montero made one of the best plays you’ll see from a catcher:

Montero has to find that ball in the air with his mask on, while turning his back on the field. Then he has to extend his arm to make the grab, and turn and throw in one continuous motion while he’s running away from the field. That’s one of those plays that a guy just has no business making, and Montero pulled it off.

I think you can see in Anthony Rizzo’s reaction as he looks back to see Montero that even he was a little wowed by that one. Just an incredible all around play, and I wanted to make sure folks had a chance to see it.