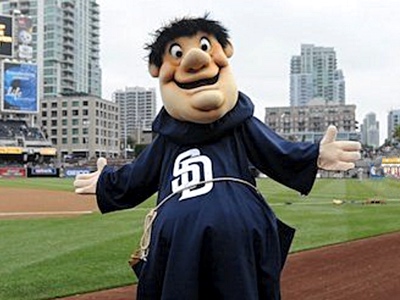 After wrapping up a series in Colorado, the Chicago Cubs will head out further west to take on the Padres in San Diego.

There, they’ll continue their tour of the NL West, before taking a breather on Thursday, followed by a slightly tougher matchup against the first place Dodgers over the weekend.

Although, perhaps we should be more worried about the (sub-.500) Padres than the 68-55 Dodgers?

Over the course of the season, the Cubs have lost thirteen series, by my count, seven of which came against sub-.500 teams (include the Mets, who are an even .500, and it’s eight). Maybe they play up to their competition, or maybe you just can’t win them all. Either way, I’m just fine with a Cubs team that plays their very best against the very best – after all, that’s who’ll they’ll meet in the playoffs.

With the blowout loss last night, the Cubs (78-45) have officially lost their first series since the All-Star Break (and seventh against a sub-.500 team). Fortunately, that is still very, very good. They continue to hold a 12.0 game lead in first place of the NL Central.

The Padres (53-71), did just take three out of four from the Diamondbacks, but only after losing five straight against the Rays and the Mets. They’ve won just four out of their past then games, and remain 15.5 games behind the Dodgers, in fourth place of the NL West.

*If it’s Jorge Soler, he won’t likely be batting eighth. There’s not an easy way to illustrate the versatility and fluidity of this Cubs lineup … which is awesome.

How about a tale of two pitchers?

There are some caveats, of course, like Kyle Hendricks did allow three homers over those two games and Jake Arrieta was pitching to Willson Contreras for the first time, but still: the Cubs’ nominal #5 has been a lot better than their nominal #1. Arrieta continues to induce a lot of weak contact and does a good job of limiting the hard stuff, too, but his ballooning walk rate is zapping him of his overall productivity (one mistake pitch can cost a lot more when you’re walking guys ahead of him) and, more importantly, his efficiency (more walks = more pitches = shorter outings). One outing won’t change a season long trend, but I will be extremely happy if Arrieta can keep the walks to a minimum and give the Cubs 6-7 innings on Tuesday.

After crushing three homers over the weekend, Addison Russell has officially petitioned the Chicago Cubs to make a permanent move to Colorado (h/t Luis). I kid, of course, but that brilliant series against the Rockies has pushed Russell’s second half slash line (135 PAs) up to .280/.356/.500 which is a .364 wOBA and a 127 wRC+ … wow.

After having traded Drew Pomeranz to the Boston Red Sox, Andrew Cashner to the Miami Marlins, and James Shields to the Chicago White Sox (plus the injury to Tyson Ross), the San Diego Padres’ starting rotation has been an utter mess – a real hodgepodge of starters piecing together innings when they can.

The three starters going this week, for example (Jackson, Friedrich, and Clemens), have thrown just a combined 178.1 IP in 2016, with ERAs approaching 5.00 and K/BBs under 2.00. The Cubs have a real opportunity to do some serious damage off of very beatable pitchers. Let’s hope they take advantage.

The Padres offense isn’t much better. The team has the third lowest wOBA in all of baseball and the fifth worse wRC+ (88). Their best hitter (by wOBA) with over 200 plate appearances, Ryan Schimpf, isn’t even all that terrifying. His ISO of .341 has provided a powerful bat (.565 SLG), but he’s striking out nearly 30% of the time and is hitting just .224 with 14 HRs in the process.

Wil Myers has been their most consistent hitter all season (.268/.345/.478; .352 wOBA), but even his statistics have been a bit depressed here in August: .257/.325/.429; .327 wOBA). With the spaciousness of Petco Park, and the struggles of Padres’ hitters, the Cubs pitchers should be able to pitch aggressively in the zone, while staying productive and efficient.