It's All Happening: Jon Lester Picked Off Another Runner Last Night (VIDEO) Skip to content 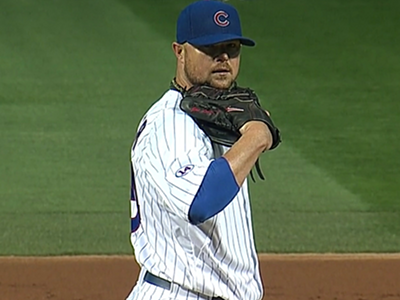 Last season, Chicago Cubs fans were made very aware of Jon Lester’s teeny, tiny, utterly confounding, but definitely uncomfortably hilarious trouble with throwing to any base besides home plate while on the mound. Remember when you couldn’t go a single Lester start without hearing about it?

It quickly became common knowledge, as base runners took more and more aggressive leads, pushing the boundaries of what was otherwise acceptable.

By the end of the season, Lester had allowed more stolen bases (44) than any other pitcher and his -5 rSB (a DRS based Stolen Base Runs Above Average metric), was the worst in baseball. The commentary about the issue was undoubtedly overblown, but it was still a real issue.

But then, on September 15, 2015, Lester did it: He successfully picked off Starling Marte at first base (after an egregiously early take-off). And then, not one start later, he did it again, picking off Jhonny Peralta at first, while unilaterally letting the league know that he could, in fact, throw the ball to a base if it was absolutely necessary.

Which brings us to 2016, and last night, in particular.

This season, Lester has allowed the third most stolen bases of any pitcher in baseball (22), but is on pace to allow about about 15 fewer stolen bases in 2016 than he did last season (44). That’s some serious improvement. To be certain, David Ross has caught 15 base stealers this year (15th most in baseball, in very limited duty), but Lester does deserve some credit, as well.

Last night, for example, Lester helped his own cause, by picking off Will Myers, as he tried to leave second and steal third. Javy Baez completed the play and Lester gained some experience points in the process. [Brett: is that a Pokemon joke, Michael? It is, isn’t it?]

Check out the pickoff below, with a bonus Javy hug tag at the end:

We said it after Lester’s pickoff last season, as well, but it remains true to this day: every time he’s able to pick off a runner (or even willing to throw to a base), he’s helping himself tenfold in the future. If he literally never throws to a base, teams will push the limits and continue to exploit that hole in his game – especially in the playoffs, where any one run is much more valuable.

But by showing he’s not only willing, but also capable of finishing a pickoff, runners and opposing managers will have no choice but to slowly give him at least a little more respect on the base paths.