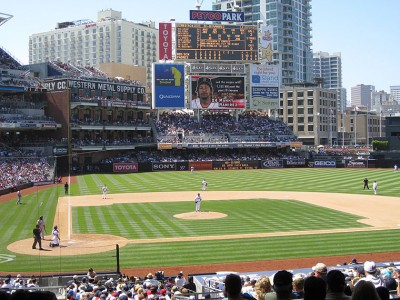 The Chicago Cubs took game one last night against the Padres, on the strength of another strong start from Jon Lester, some stellar defense across the board, and a trio of home runs from Jason Heyward, Addison Russell, and Kris Bryant.

Game two is tonight and it’s another late one (9:10 first pitch).

Jake Arrieta will take the ball, while looking to bounce back after a pretty rough start against Milwaukee (5.2 IP, 5ER, 3H, 7BBs, 3Ks). He did have three nice starts just before that clunker, where he was able to limit the damage, but he did so by limiting walks. If he can’t find his control consistently, the walks will continue to worsen his production and limit his ability to go deep into games. Arrieta will once again pitch to Willson Contreras. There didn’t seem to be much issue the last time these two lined up (in other words, I’m not blaming Contreras for the seven walks), but let’s see if things go smoother this time around.

Opposing Arrieta is lefty Christian Friedrich. Friedrich, 29, has made 17 starts for the Padres this season, but has been very hittable throughout the year (4.69 ERA, .266 AVG allowed). He just hasn’t been able to strike many batters out (16.9%), and is walking more than his fair share in the meantime (8.9%) – a dangerous combination. Cubs hitters should look to be aggressive, then, and do damage with their bats instead of their patience. He doesn’t seem like he can miss a lot of them. Lefties have been hitting Friedrich a bit better than righties this season, but the opposite is true for his career. Mostly, he’s just one of those guys that batters don’t seem to have a problem with from either side.