Cubs Fans Are Everywhere, and Will Go Anywhere Skip to content 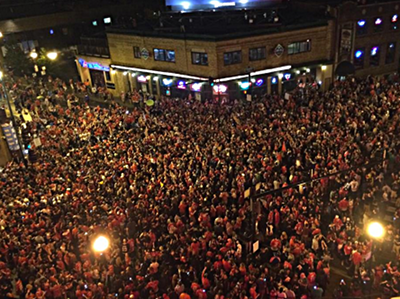 As we discovered earlier in the year, the attendance at Wrigley Field this season has been among the very best in all of baseball (top five, to be exact).

Similarly, we noticed the Chicago Cubs TV ratings have also been up across the board, including the biggest year-over-year bump in all of baseball.

In short, the Chicago Cubs have been an extremely popular team over the past few months, and they have the fan support to prove it.

But those aren’t the only two ways Cub fans have supported their team this year. No. Cubs fans, they travel. According to Bill Savage at ESPN.com, Cubs fans are among the most well-traveling group of fans in all of baseball. In fact, nearly every single team experiences a huge bump in attendance when the Cubs roll into town.

According to Savage, with data help from Matt Marrone, Cubs opponents can hope to experience upwards of a 16,871 person spike (Chicago White Sox) when the blue busses roll into town. Of course, if you’re thinking well sure, that’s the White Sox, they’re just across town, think again. The Rockies have seen a 13,422 fan spike. It’s 12,311 for the Braves, 9,456 for the Brewers, and 9,079 for the Nationals. In fact, only the Giants did not receive an attendance bump when the Cubs came to town (which was back in May, when it’s still rather chilly, and attendance was essentially flat), but the second lowest figure comes from the Pirates and that was a positive 1,113.

Well that, and they simply exist everywhere. “Thanks to the Rust Belt Diaspora that has sent so many people from Chicago to cities in the South and West,” Savage opines, “Cubs players can count on cheering and autograph-seeking fans at any ballpark from Atlanta to Phoenix to San Diego. Baseball fan identity is as much about who your mother or father rooted for as it is about where you were born, so the children of Cubs fans who moved to the Sun Belt are just as genuine as any born and bred on the North Side.” Of course, the former national broadcast of every Cubs game (on WGN) supported and lengthened that transplant fandom, as well.

The direct impact of this sort of national fandom isn’t as easy to monetize or even quantify, but it is important nonethelesss. Aside from the more straightforward monetization of fandom (merchandise, tickets, etc.), the Cubs are known to be working on their TV deal as we speak. Having a deep-rooted fanbase throughout the country could plausibly benefit that deal in ways the current delivery of games (i.e. local TV broadcasts only) does not yet contemplate. And, of course, the more lucrative that deal, the more money the Chicago Cubs have to play with.

So keep on cheering, keep on watching, and keep on following the Northsiders across the country. You may not realize it, non-Chicagoans, but you’re doing your part, too. And hey, who doesn’t like a little extra blue anywhere you go?