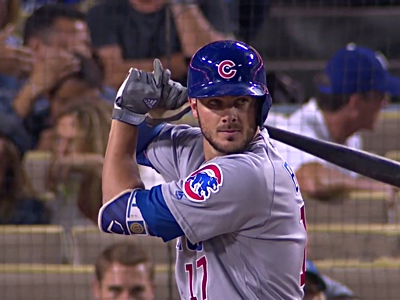 That’s what the Cubs-filled crowd was chanting last night in Los Angeles after Kris Bryant hit his second of two homers in the game, and I think they were right. It’s going to take some kind of herculean run by another player plus a dramatic fall-off for Bryant at this point for him not to win the award. That is simply the reality of what he’s done this year, and reflective of the trajectory that he’s on. There are no signs of him slowing down.

Last night, with the Cubs down a couple runs in the 8th inning, Bryant brought them within a run by sending a monster blast out to center field.

After Jason Heyward scored on a wild pitch in the 9th to send the game to extras, Bryant got a chance to play hero once again, and he came through in a big way:

Cubs win. And hey, that was technically an opposite field blast, Bryant’s first of the year.

That kind of distinction matters very little, though, when you’re having a year like Bryant, and when that homer is number 35 on the year. Not only did Bryant’s blast give the Cubs the win, but it also put him back in the NL lead, one homer ahead of Nolan Arenado.

And the really fun one? With the big day at the plate, Bryant’s WAR shot up to a whopping 7.3.

That’s the best in baseball. Yes, ahead of Mike Trout, who is at 7.1. The Mike Trout.

MLB.com packaged both homers together if you want to watch, together with multiple calls, including Pat Hughes on the radio, and Vin Scully for the Dodgers: