So, is Addison Russell's Ridiculous, Game-Saving Catch Going to Be the Cubs Play of the Year? Skip to content 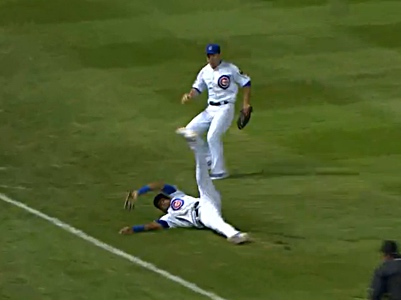 Even in the moment, you knew it was a huge grab. But it wound up being a game-saver.

It was the 7th inning, with the Cubs up only three. The bases were loaded, the middle of the Pirates’ order was doing its thing, and a Gregory Polanco blooper would have scored at least two runs, and perhaps even cleared the bases with the runners going with two outs.

As it turned out, the incredible catch by Addison Russell wound up being even more, because the Cubs’ lead eventually dwindled to just one run by the time the game ended. If he doesn’t make the play, the game probably goes a whole lot differently.

And that’s all the situational stuff. That is saying nothing about just how absurdly difficult, and ultimately impressive the catch itself was. We watched it last night, but if you missed the play, do yourself a favor and watch now. Even if you did watch it last night, watch this Statcast version for even more context on how great the catch was:

Covering 106.8 feet at a 98.5 percent route efficiency, and sprawling out to make the catch pretty much means he had to be nearly perfect to make that play. Throw in the fact that the wind was howling in and moving that ball’s trajectory the whole time, and wow. Just wow.

When you watch the whole thing, you really get an appreciation for just how far he had to go to get that ball. And the more you watch it, the more you see how difficult it was to then actually snag the ball.

Kris Bryant talks about his front row seat to Russell’s defense, and Joe Maddon offers his praise, here if you want more on the catch.

The question now: is that the catch of the year for the Cubs? Obvious other contenders include Anthony Rizzo’s second into-the-stands catch, and Jason Heyward’s diving play in San Francisco earlier this year (you forget about that one?).

Then, of course, you have to have an entirely separate defensive play of the year conversation, which could include so many other Russell plays and Javy Baez plays. My favorite overall play is still probably the one where Baez didn’t even actually get an out. That Miguel Montero play last week in Colorado is up there for me, too.

Am I missing any other obvious “best catch” and “best play” contenders? Since this is the best defense in baseball by a country mile, there are so many great plays to try to remember …