It's Happening: The Mets Will Take the Plunge on Tim Tebow (UPDATE) Skip to content 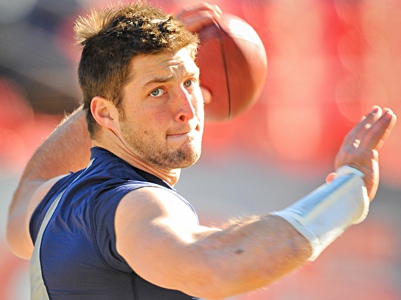 We’ve wondered for a while now which MLB franchise would take the not-quite-no-risk flyer on former NFL quarterback Tim Tebow, who is trying to make a go of professional baseball for the first time at age 29. The only thing we knew for sure at this point was that the Chicago Cubs weren’t interested in being a part of the circus.

The New York Mets, however, after years of a circus-like atmosphere in the organization for all the wrong reasons, are apparently not averse to the big-market attention Tebow will draw:

Mets are signing Tim Tebow to a minor-league contract, an MLB source tells ESPN. Instructional League or Arizona Fall League next for Tebow.

This could be a lot of fun to follow from a SchadenMets perspective.

Since the minor league seasons have ended, it’s instructional ball (more likely) or the Arizona Fall League (less likely) for Tebow right now if he wants to get into game action [See Update below]. It’s going to be humorous to see the New York – and, let’s be honest, national – media obsessing over instructional league games where the rules aren’t really the rules and the outcome of an at bat (let alone the “game” itself) is not really the purpose of the league.

And, hey, if Tebow somehow overcomes the extremely long odds and looks like he has real potential to hit big-league-caliber pitching, he could move up the ranks in the minor leagues quickly next year. If that happens, or even if it doesn’t, I tend to think it’ll be a nice story for a little while, and then will become utterly exhausting for everyone in the Mets’ organization. Typically, you wouldn’t expect a player – even the best of the best – to reach the big leagues shy of a couple years of minor league experience. The Mets might face questions about when they’re going to call up Tebow every time he has a two-hit game at Low-A. Once again, I’m glad the Cubs elected to sit this one out … and I’m glad another organization did not. This could be great.

Plus, like I said: maybe he defies all the odds and is actually able to reach the big leagues. I think it would be easy enough to set aside the LOLTebow stuff at that point and just enjoy what an incredible story that would be. The guy is physically a beast, and was a great player back in the day. Maybe. Just maybe.

But probably not. The fact that Tebow is signing with a New York team will probably do little to squash chatter that this is all just about attention, but that coin has two sides – the Mets undoubtedly want the attention, too. And boy will they get it.

UPDATE: It’s instructional ball for Tebow, which makes a heck of a lot more sense:

We have signed OF @TimTebow to a minor league contract. He will participate in the #Mets Instructional League. pic.twitter.com/I6gmW0b6hY

As for how serious this all is …