No Cubs Game Today, But You Can Watch Addison Russell Do This Skip to content 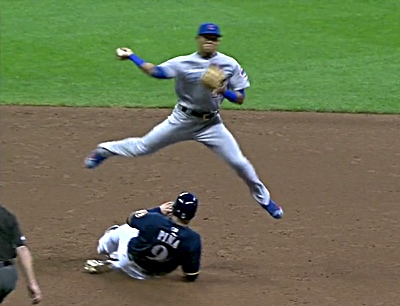 For most of the season since he made his debut, there’s been a refrain around Javy Baez: he makes a play every single game that makes you want to watch it again the next day.

It was fair and deserved, because seriously it’s been constant.

But I’m wondering if Addison Russell – like Anthony Rizzo vis a vis Kris Bryant in the MVP race – started to feel a little left out. After all, last year, it was Russell who was repeatedly doing things that should not be possible.

And, in the last month, Russell has done some pretty incredible things, vaulting himself squarely into the Gold Glove conversation at shortstop. How about the turn he made at second base last night on a double play that should have been impossible:

I definitely want to give some credit to Rizzo, of course, for pouncing as quickly as he did on the Matt Garza bunt (Rizzo might be the best in the game at that). But that isn’t a double play if Russell isn’t positioned in front of the bag, where he’s completely exposed. And then, the only way to avoid the runner is to leap, but doing so robs you of the ability to get anything at all on the return throw to first.

… except somehow Russell DOES get plenty on the throw, and the Cubs turn two. Russell remains right there with Brandon Crawford, defensively speaking, and those should be your two Gold Glove finalists at shortstop in the NL. Crawford probably takes it home (arguably deservedly, but also because we know how these things go when there’s a more established player with a better bat), but it’s awesome that Russell is right there.