Now That's More Like it: Watch Miguel Montero and the Cubs Walk It Off in the 10th! Skip to content 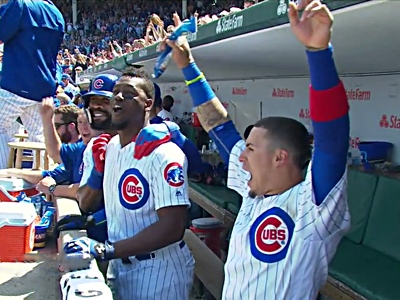 Now THAT’s how you celebrate clinching the division!

After trailing the Brewers all day long, the Chicago Cubs came back big in the bottom of the ninth to send the game into extra innings.

But the free baseball didn’t last long, because Miguel Montero led off the bottom of the tenth with a walk-off home run (his seventh) out to left field. Celebration – and insanity – quickly ensued.

But before we get into the wild ninth, or Montero’s walk-off, let’s look back on the rest of the game a little bit, because there was a lot to take away.

For example, John Lackey started for the Cubs, but didn’t quite have his best stuff in his third start back from the DL. He did last 7.0 innings, but also allowed four earned runs on nine hits and two walks.

And while his overall line wasn’t really that bad, the majority of the damage came on three home runs, and at least a couple more were hit out to the warning track. Homers haven’t been a terrible issue for Lackey throughout the summer, but they can be detrimental to any pitcher/team in the playoffs. The most important thing, however, is that Lackey looked healthy, made 105 pitches, and struck eight batters out.

But let’s get back to the fun stuff.

Down 4-2 heading into the bottom of the ninth inning, the Cubs made things interesting right away. Willson Contreras led off with a double and later scored on Chris Coghlan’s third hit of the game. Then, after Tommy La Stella reached on an error and Munenori Kawasaki was hit by a pitch, the pinch-hitting Addison Russell knocked in the game-tying run with a head-first-sliding, infield-hit to the right side of the diamond. Unfortunately, the Cubs couldn’t capitalize on a bases loaded, one-out situation (Matt Szczur flew out and Javy Baez grounded out softly), so the game went into extras.

But Aroldis Chapman did his thing in the top of the tenth – striking out the side on 11 pitches – and the rest, well the rest was all Miggy:

It was a wild way to end the game and even wilder way to celebrate the divisional clinching that occurred in the wee-hours of the morning, but I wouldn’t have it any other way. The anti-climactic mood of the early-morning clinching was completely erased by that walk-off win. Wow.

(I’d be remiss if I didn’t mention that Montero was in the game as a replacement for an injured Jorge Soler, but the fallout for that can wait for another day. For now, just enjoy it).

A disguised Theo Epstein and a joyous Jed Hoyer perfectly express the collective feeling right now in the bleachers:

Theo may have the mustache but Jed might be the happiest person in the bleachers! @BleacherNation @Michael_Cerami pic.twitter.com/r4F94tvZ8J

How about a couple of celebratory shots:

From the field to the clubhouse: #Cubs continue to celebrate division title. WATCH LIVE: https://t.co/XC5zfIk1wf pic.twitter.com/VHh50509YS

Montero gets a hero's shower: pic.twitter.com/xC3qFBPzN5