Could the Cubs Be the Best Defensive Team of All-Time? Skip to content 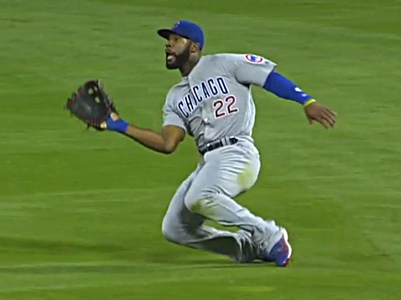 Earlier this season, we pointed out that the 2016 Chicago Cubs are the single best defensive team in baseball this year, by a very long shot.

Indeed (at the time), the Chicago Cubs 55 defensive runs saved and 6.47 Park Adjusted Defensive Efficiency rating was so far above every one else (even the team in second place), that there was really no discussion over who was the best.

Now, advanced defensive metrics aren’t quite at their peak level of accuracy just yet, but even by the eye test, this Cubs team holds up in 2016.

But, as it turns out, we needn’t stop with just 2016. There’s at least a chance, according to Matt Snyder at CBS, that the 2016 Chicago Cubs might finish as the single best defensive team ever … and he’s got a legitimate argument.

While the Cubs find themselves in the middle of the pack in terms of fielding percentage, Snyder contends that we’ve all evolved beyond basing our perception of defense on a statistics with extraordinarily low variance from the best to the worst team (every team in the Majors is between .978-.988). Instead, Snyder dips back into Defensive Runs Saved.

As you can see, aside from the Giants, no team even comes close to the Cubs. In fact, nine of the fifteen teams in the NL have negative DRSs. But we already knew the Cubs were among the best in the league at this stat … which is why Snyder takes it a step further and adds some historical context.

Stepping away from defensive runs saved, Snyder shifts towards defensive efficiency. Essentially, what the percentage of balls put into play that are converted into outs. He admits that it’s a fairly basic measure of a defense’s abilities, but argues that, over a large enough sample, it can actually tell you a lot.

Well, in 2016 (through Friday), the Chicago Cubs have defended at a .749 clip. That ranks among the top 20 in the history of baseball, but also represents the highest mark since 1972 (roughly 45 years ago). But Snyder (and we) promised you an argument for the single best defense in baseball history, and I don’t intend on leaving you hanging. Indeed, when Baseball Prospectus puts in a park-adjustment factor on that rate, the Chicago Cubs come up as … you guessed it … the best in the history of the sport.

Make sure to head over to Snyder’s article, because there’s plenty more to dig into – including a look at each individual defensive unit (catchers, infielders, outfielders, and overall).

But there’s even more evidence than that.

Craig Edwards (FanGraphs) took a look at the Cubs pitchers, and asked who’s responsible for the Cubs’ incredible pitching stats here in 2016? While the pitchers themselves, deserve most of the credit (because, well, of course*), the Cubs defense may be a bit more than just a contributing factor.

In 2016, Edwards writes, the Cubs have produced one of the biggest ERA-FIP differences in the history of baseball. In fact, the -0.72 difference between their 3.08 ERA and 3.80 FIP is tied for the third biggest difference since World War II. How have they accomplished this? Well limiting hard contact and inducing a bunch of weak contact has definitely contributed, but a historically low BABIP has played a significant role.

All five of the Cubs starters, for example, have posted BABIPs lower than what they put up in 2015 and for their career. And, as you might have guessed, it’s probably due to the defense.

The Cubs UZR of 67 runs above average this season is about 25 runs better than the second-place Giants. Over the last 15 years, only 29 teams have posted an UZR of at least 50 runs above average, the Cubs being the seventh best during that stretch.

Given the -0.56 correlation coefficient between ultimate zone rating (something the Cubs’ have excelled at this season) and team BABIP, it’s not hard to credit the Cubs defense with much of the success. So, by posting historically good marks in all of DRS, Defensive Efficiency, Park Adjusted Defensive Efficiency, and UZR, the Cubs defense isn’t just good. It might be the best.

But does that really surprise you?

* Although Cubs pitchers are certainly benefitting from an historically good defense, I do think (it’s possible) their success is being discounted too heavily. While we generally accept a pitcher’s ability to pitch to the situation, we rarely give them any statistical credit for doing so successfully.

Might the Cubs starters/relievers – who are undoubtedly aware of the historically good defense behind them – simply be pitching to contact much more frequently than they might otherwise? If so, should they really be docked credit, because of fewer strikeouts (and thus, for one example, a higher FIP)? While it may be near impossible to prove, I’d argue that this particular Cubs pitching staff might have a lower FIP (but higher ERA) with a worse defense, because they’d be pitching for strikeouts (as an example) instead of contact. With this defense, though, Cubs pitchers could be executing in a different way, knowing that the best way to get the results is by letting the ball be put in play.

That’s knowledge. That’s skill. That’s strategy. And if Cubs pitchers are doing it on purpose and finding success, maybe it’s time they get credit for it.