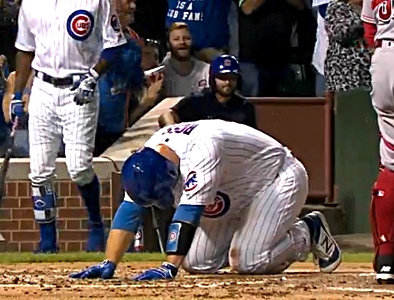 I can’t say that Jon Lester, who didn’t have a hit in his career until last July, notching an RBI last night was an extreme case of baseball unpredictability. After all, Lester just drove in a run in his last start, and he’s got six RBI on the year.

I can’t even say that Lester rocketing the ball 107mph into the gap in right center was crazy baseball, because Lester has five hits on the year, and even last year was one of the hardest-hitting pitchers in baseball.

Moreover, Lester scoring his battery-mate David Ross on the double is not a surprise, given that Ross starts when Lester does, and typically bats right in front of the lefty.

But when you combine the fact that it was Lester rocketing the double and Ross scoring *from first base,* that’s when it all becomes just too much for me. Baseball is delightfully weird.

Here’s the play last night, if you missed it:

That baby is a shot, and since there were two outs, Ross was off to the races. As the Statcast video notes, Ross, 39, had scored from first base on a double just FIVE times in his entire career. A speed demon he is not.

By the time he was rounding third, Ross was clearly gassed, which probably impacted the gracefulness of his slide/flop at home plate. After the game, Ross said he was glad he gave folks something to enjoy, and he thought he was going down a few times before the end (Cubs.com).

The Cubs had some fun with it on Twitter:

And Ross was a good sport about it:

Next time, perhaps the Cubs will let Grandpa Rossy use his scooter.