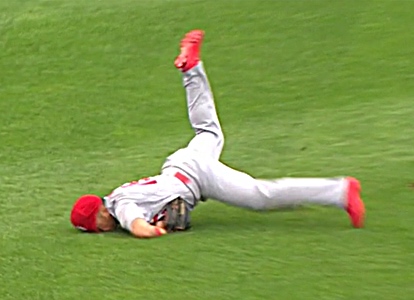 Among the many enjoyable moments in the first inning yesterday against the Cardinals, the highlight of highlights was probably sometime Cardinals outfielder Kolten Wong getting a mediocre read on an Anthony Rizzo liner, trying to adjust his angle while charging the ball, losing his footing, and absolutely devouring the grass in Wrigley’s outfield.

In the process, he gave us an image that will live on pretty much forever:

The perfect shape of his legs even affords us so many photoshopping “L” opportunities. All in due time.

If you missed the play – on which Wong was not hurt, by the way, so it’s OK to laugh – you will want to un-miss it right now. Heck, even if you didn’t miss it, just watch it again, because it’s hilarious.

Rizzo later made a great defensive play of his own, just after Kolten Wong had singled to put two runners on base and give the Cardinals a little hope:

Rizzo runs that play as well as anyone in baseball, and the strong throw from Kris Bryant turned it into a surprise double play. That doesn’t really have anything to do with Wong’s face-plant, but it was still nice to see. Are you complaining?