The Overwhelming Loss of Jose Fernandez Skip to content 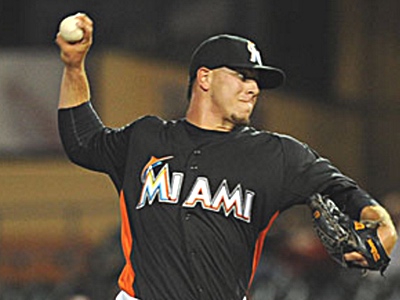 Like most humans, I can stave off self-interest for a little while, but those thoughts always creep in. Something awful has happened: how does this affect me?

On learning this morning that 24-year-old Marlins pitcher Jose Fernandez was killed overnight in a boating accident, my first reaction – like most of yours, I expect – was simply shock. Disbelief. Rejection. A thing like that doesn’t happen like this, does it? I wasn’t prepared for this news today, so it must not have happened. This is one of those stupid, bs hoaxes. I know it.

And then it’s not.

That’s when the vacillating numbness and sadness sets in. For him. For his family. For his friends. For his teammates. For the entire South Florida community. For all that might have been and now will not. It’s just so sad, and it’s too much.

And then you start to feel the feelings. The personal ones. The awkward mix of frustration and despondence and guilt. Jose Fernandez … was one of my favorite players to watch. He made my baseball-viewing experience so much better. Whenever the Cubs would face him, I always found myself more in awe of a nasty pitch that struck out a Cubs batter than angry that a Cubs batter had struck out. Fernandez, as a player and a personality, was everything baseball needed. It is not hyperbole to say that he was in an inner circle of players who singularly embodied the future of this sport.

I am going to miss watching him pitch. My sport is worse for having lost him. I. Me. I’m thinking about me.

There’s the guilt. I can tell myself that this process is natural, and I’m not an evil person. But I suppose the guilt, too, is natural.

It is precisely because of his outsized talent, visible joy, incredible story, and positive energy that this is such a crippling blow for the sport. The game doesn’t matter at times like this, but reflecting on the impact of Fernandez’s loss only underscores just what an incredible person he was. We experience it through what Fernandez meant to us as a baseball player, but it’s all the more difficult to process when you know that he meant even more to those who knew and loved him because of who he was as a person.

Today is not the day for discussing, or even pondering, the sport-specific, inside-baseball impact of Fernandez’s death. There will be a time for that, because that is the reality of our world, but I just can’t do it today.

For now, I’ll note only how truly impressive Fernandez’s arc has been. From his defection – after three failed attempts – from Cuba at age 15, to becoming a first round draft pick in 2011, to spending just one full season in the minor leagues in 2012 (reaching no higher than High-A), to debuting on the Opening Day roster for the Marlins in 2013.

Fernandez dominated in that 2013 season in a way that made him must-watch TV every time he took the mound (and, often when he stepped to the plate, too). He was tremendous again in 2014 until his season was interrupted by Tommy John surgery, from which he returned in the second half of 2015. Again, he was excellent, even as most pitchers aren’t that good again that quickly.

And, of course, he was pitching so well again this year. The final start of his career was an eight-inning, twelve-strikeout masterpiece against the Nationals on Tuesday. By the updated version of game scores used at FanGraphs, it was the best start of his career.

Jose Fernandez was a star. He was a source of inspiration. He was the connective tissue whose rapturous joy on the field reminded us of what baseball can be. I hope his family can, in time, find peace.