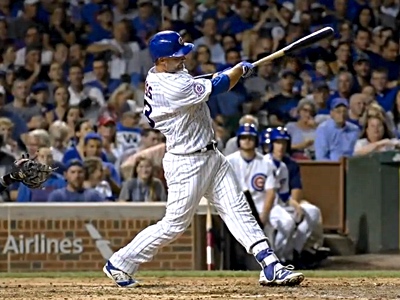 Sometimes, things really do play out the way you’d dream it up.

Officially, David Ross got his sendoff from the Cubs on Friday, in a surprise tribute to the back-up catcher who became so much more in his two years with the club. But it was last night’s game, Ross’s final regular season game at home, where he got his real send-off into retirement from the fans: a standing ovation every time he came to the plate, a curtain call after he homered to give the Cubs their first run, and another after he was removed from the game in the 7th inning.

It was touching and special in the way only unplanned moments can be, and a perfect way to cap off Ross’s time with the Cubs. The curtain closes with Ross waving to the fans who’ve come to love him as though he’d been their grandpa for decades.

It’s hard to say exactly why some players connect so much with the fans in such a short time, though, with Ross, it’s a little less difficult to articulate: he’s a beloved teammate, a clubhouse leader, a positive energy, and guy who improves the baseball experience of all around him, including the fans. Sure, he was “only” a back-up catcher, and sure it was “only” two years. But they’ve been fantastic years for the Cubs, and whether it showed on the field or not, Ross was a huge part of that.

Ross may have come up with the Dodgers, bounced to the Reds, established himself with the Braves, and won a championship with the Red Sox, but he is a Cub. He’s ours.

If you missed the show last night, here’s a clip of his homer and the two curtain call moments:

As far as farewell seasons go, Ross’s is about as good as it gets. Though I suppose capping it off with a certain historic postseason run would move that needle quite a bit further …

We don’t know exactly what Ross will be doing next year, as he might take some time off from baseball to spend with his family. But if and when he’s ready to move on to the next step in his career, you better believe the Cubs will be open to having him on board in some capacity. And Cubs fans will go right on loving him.

More on Ross’s finale and tears here and here.

Thank you for making last night so special for @D_Ross3. If it was earlier in the year, he may have done a DL stint for strained tear ducts.