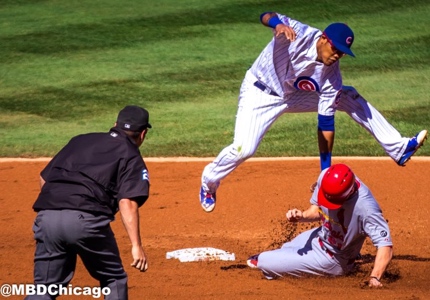 Throughout the season, we’ve been discussing the various dominant pitching performances from Cubs starters – especially Cy Young candidates Kyle Hendricks and Jon Lester – through the lens of the historically good defense behind them.

With Kyle Hendricks on the mound doing his thing, Cubs’ defenders were on high-alert, ready to help Hendricks win the game his way – turning balls-in-play into outs. Most of the time, that means making every single routinely play that comes your way, but sometimes, it means flashing that Gold Glove leather on plays that shouldn’t be made:

But did that play really surprise you? Sure this team has a three-time Gold Glover in right field in Jason Heyward and a human highlight reel in Javy Baez, but Addison Russell can be as slick or slicker than any of them, and has been an absolute wizard from the shortstop position.

Last season he split time between second base and shortstop, so many of the advanced defensive statistics were split between two positions. Luckily (for tabulation purposes), he hasn’t moved around a lot this year, so let’s check in on some of those numbers and see where he falls throughout the league.

Off the bat, Russell’s 21.8 Def (a comprehensive defensive metric that adds a positional adjustment) is fourth best in baseball in 2016. That means that Addison Russell has been the fourth best/most valuable defensive player at any position in all of baseball this season. He’s behind only behind Francisco Lindor (SS, Cleveland), Brandon Crawford (SS, Giants) and Kevin Pillar (CF, Blue Jays). That is some seriously elite company. For reference, FanGraphs writes that anything over +20.0 should be considered “Excellent,” (the highest rating bucket) – Jason Heyward (14.9, between right and center field) is 11th.

Let’s get a little more specific.

While there are only three defenders in baseball better than Russell at their position, two of them (unfortunately) are shortstops – and one of them (more unfortunately) is in the National League. Grabbing a Gold Glove in 2016 is doable, but might be tricky.

Even still, Russell has clearly established himself as one of the very best defensive shortstops in baseball, leading in a couple of categories, but staying near the top across the board.

Whether that’ll be enough to carry him to a trophy is yet to be seen, but he’s put himself in a good position to contend for the award annually.