John Lackey's First Year with the Cubs - Did They Get Their Money's Worth? (Very Yes) Skip to content 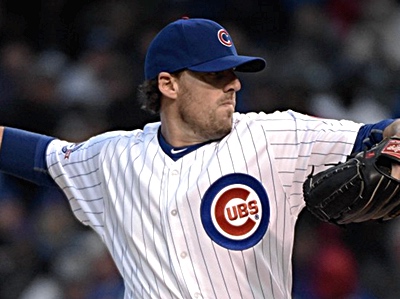 Last offseason, the Chicago Cubs signed a 37-year-old John Lackey to a two-year, $32 million deal. And despite a solid season for St. Louis the year prior, and a sense that the contract was by no means out of whack with the market, the signing was met with a bit of trepidation from some Cubs fans.

Undoubtedly, some of that concern came from the reputation Lackey carried with him (which has turned out to be a complete non-issue this season), although the majority of it appeared to be age/performance based.

Coming into the 2016 season, Lackey was a 37-year-old righty, three years removed from Tommy John surgery. Moreover, while the results he posted in St. Louis were fantastic (2.77 ERA), the peripherals told a different story (3.57 FIP, 3.77 xFIP). After all, the Cubs couldn’t count on the same voodoo magic the Cardinals sold their collective soul for back in the early 2000s. Right?

But yesterday, Lackey made his 29th and final regular season start of the year and it was another solid, if unspectacular performance. Although his impending playoff starts may ultimately dictate the story of his season, I think it’s important to look back now on the 188.1 innings of work he has already provided the Cubs and see if they got their money’s worth.

In short, it was perfectly good final game to close out the season, especially on a team that has already clinched and is just trying to get to the postseason in good shape. When all was said and done, Lackey lasted five full innings, allowing just one earned run on five hits, three walks, and three strikeouts. Although it took Lackey 93 pitches to finish those five innings, he got in plenty of solid prep-work before that. According to Brooks Baseball, Lackey threw five different pitches yesterday (a four-seamer, two-seamer, change-up, slider, and a curveball), and used all but one (the change-up) at least eleven times.

Given his time spent on the DL just before September, the only thing that really mattered for the playoffs was that Lackey could continue to make full, healthy starts while commanding the entirety of his repertoire, upon returning from the DL. He’s now done that (multiple times) and should be expected to perform up to his full abilities come October – the “big boy games,” as Lackey likes to call them.

But when those big boy games get played, the rest of Lackey’s season may be forgotten. The relative importance of the 6-7 innings he throws in, say, Game 4 of the NLDS might outweigh a season’s worth of numbers in either direction. That’s not necessarily fair to Lackey or the fans (and it’s also the reason all of the award voting takes place before the playoffs).

So how has Lackey’s season been? Has he been worth his contract, more or less? Let’s see first where he stacks up against the other qualified starting pitchers throughout baseball.

So, by just about every important measure, Lackey has roughly been a top-15 pitcher in the National League and a top 30 pitcher in all of baseball – that alone should pretty much tell you all you need to know, but even a simple $/WAR calculation cements the argument.

Essentially the 2016 Cubs have paid $14.5 million in exchange for $24.8 million in value from Lackey’s performance. While that is nice in it’s own right, it also takes a little bit of pressure of 2017 as well. Lackey need only be worth about one win in 2017 for the contract as a whole to have been worth it. The Cubs did lose a draft pick for signing Lackey, though, so let’s call it two wins.

But even though we can see his performance this year has objectively validated his contract, we’d still like to see how it ranks out against his past (but post-Tommy John surgery) seasons and how he/the Cubs feel about it. Well, according to Lackey, it’s been “one of the better ones” of his career. “If you look at things besides wins and losses,” Lackey said after yesterday’s game, “and some of the smaller numbers, it’s probably the best I’ve ever done.”

Well, let’s do just that.

There’s not much of a definitive conclusion to draw from this, other than what we’ve already come to accept: yeah, it was a pretty good season overall and definitely worth the money. Lackey was better than his former-self in many ways (ERA, K rate, AVG against, Soft-hit rate, fWAR), but not in many others (IP, xFIP, GB rate, Hard-hit rate).

What that means, however, is that Lackey was exactly the guy the Cubs thought they were getting. Sure he made some improvements here and took some hits there, but overall he’s the pitcher he has been for (now) four straight years. And that’s a good thing!

If he can add a couple of strong starts in the playoffs, too, well, he might just have been the steal of the offseason.