Chris Coghlan Has a Mild Ankle Sprain, But Also Has Time to Recover Skip to content 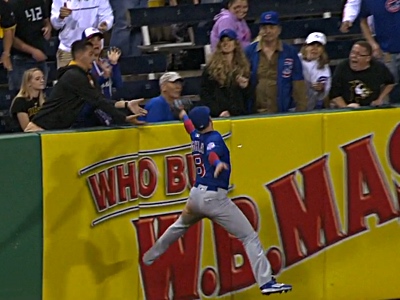 There was an unnerving moment in last night’s game, when left fielder Chris Coghlan went into the wall to try and make a leaping catch. His foot caught a seam in the padding of the wall, his ankle twisted, and he went down:

It looked bad, but his demeanor after made it seem like it might not be *that* bad – though you can’t always tell. Coghlan left the game, and the official word from the Cubs on the injury was a mild ankle sprain.

After the game, manager Joe Maddon really emphasized the word “mild”, which was emphasized to him, apparently, by the training staff (Cubs.com). The Cubs will see how Coghlan is feeling, though he won’t be playing today either way. Ankle sprains are a tricky business, with some of the mild ones lingering for a while, and others dissipating almost immediately. The Cubs would be extremely cautious at this point in the year, obviously, with the target being a healthy return in time for the NLDS, which starts a week from tomorrow.

The timing of the injury is a little tricky, though, as Coghlan was seeing a lot of playing time with Jorge Soler out with his own injury (a lingering, but theoretically non-serious side issue). And Coghlan was definitely making the most of it, as his hot month took his line with the Cubs all the way up to .268/.405/.412 with a 122 wRC+. Hopefully he’ll be good to go in plenty of time for the NLDS, but he probably won’t get in much action before then, as the Cubs play just four more games and then have four off-days before action starts again.

Also hopefully Soler is able to play this weekend in Cincinnati, and the Cubs then have their full complement of left field options when the playoffs begin.

It’s possible, though, that neither Coghlan nor Soler would actually be starting that first game of the NLDS anyway – if Jon Lester starts, as expected, Joe Maddon has typically put Kris Bryant in left field and Javy Baez at third base for those games. Of course, you’d still want Coghlan’s and Soler’s bats available off the bench.