A Reminder That Curses and Jinxes Aren't Real: Cubs Picked to Win it All on SI Cover Skip to content 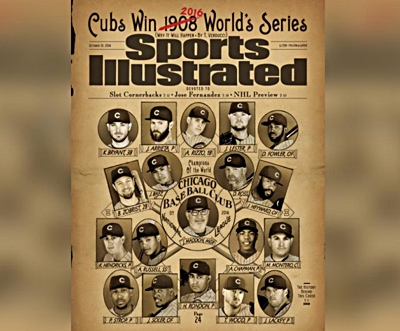 There’s your new Sports Illustrated cover, picking these Chicago Cubs to win the World Series for the first time, as the cover hints, since 1908.

You can read here about how SI came up with the cover, a cool twist on an actual 1908 magazine cover, which will almost certainly not doom the Cubs. As we discussed yesterday, they are the overwhelming favorite as it is.

But the reality is that even overwhelming favorites lose in the postseason all the time, and, even viewed in the most charitable light, the Cubs still have a 70ish percent chance of failing to win it all this year. It won’t be because of a curse or a magazine cover. It’ll just be a thing that happened. If it happens.

You can still save this cover at which to throw eggs if the Cubs do lose, however …

(Or you can go ahead and read Michael’s great piece about Kyle Hendricks, lest it get buried by a folks panicking about the cover jinx.)