Breaking Down The Legend of Madison Bumgarner Skip to content 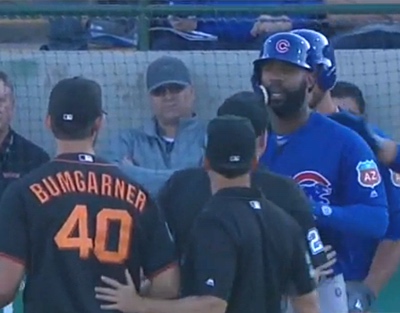 And if the Cubs can take him and the Giants down on Monday night, they will move on to the NLCS for the second straight year.

THE (LITERAL) ROAD TO LEGENDARY STATUS

Few players have embraced the role of road warrior like Bumgarner. His adventures away from pitcher-friendly AT&T Park is part of what makes him stand out from other big-game pitchers. The Giants are 8-0 in the playoffs when he pitches on the road and he is 6-0 (0.50 ERA) in starts. Bumgarner has tossed 46.2 playoff road innings, striking out 39, and walking only nine. He has allowed a grand total of three earned runs in those starts – two of which were solo home runs.

Overall, the Giants are 10-3 in Bumgarner’s postseason starts, but 12-3 (with a save) if you tack on a pair of games in which he has come in as a reliever.

The legend has only grown larger in his most recent appearances, as San Francisco has won six straight postseason games in which Bumgarner has pitched. This stretch (five starts, one relief appearance) is remarkable, as Bumgarner has limited hitters to a .143/.185/.227 slash line and 0.79 ERA to go along with 35 strikeouts (21.2 K%) and six walks (3.6 BB%).

SO, HOW DO YOU BEAT BUM?

The New York Post tried to answer this prior to the Mets’ Wild Card loss by asking Justin Ruggiano (5-for-11, 3 HR, 2 BB) and Jonny Gomes (8-for-13, 2 HR) who have hit him well. Both said there will be pitches to hit and emphasized the need to be committed to a plan at the plate. Ruggiano, an ex-Cub, suggests to be ready for fastballs while laying off the cutter.  You can read the insight via Joel Sherman in its entirety here.

Knocking out Bumgarner on a pitch count seems ideal, but is unlikely, since he gives up little damage and works in the strike zone. An alternative might be to outlast him. Bumgarner threw 119 pitches in the Wild Card game despite needing only 21 to get through the first three innings. It was the most he has ever thrown in a postseason game. As is the case with most pitchers, things can get rough for Bumgarner after 100 pitches. He has a 4.4 K/BB ratio through 100 pitches, but that drops to 2.9 after the 101-pitch mark. Only 219 batters have seen him for a fourth plate appearance, where that number drops to 2.5.

No team drew a higher percentage of walks (10.4 BB%) or faced more pitches (25,160) than the Cubs in 2016. Only the Blue Jays saw more pitches called for balls than the Cubs (9,576). To beat Bumgarner, it seems as if the Cubs will need to be equal parts patient and aggressive. And they seem like they have the lineup that can push that envelope.

WHAT MAKES HIM SO HARD TO HIT?

Having secondary offerings that are better than his good fastball makes Bumgarner a tough customer. Using FanGraphs’ linear pitch weights as our guide, Bumgarner’s curveball (9.4) graded out as the second most effective curve in 2016, while his slider (15.0) ranked ninth.

According to BrooksBaseball.net, his curveball and slider (Brooks categorizes it as a cutter) have been the most effective pitches in inducing whiffs. The curveball has a whiff-per-swing rate of 41.34 percent, while the cutter comes up with a 25.04 percent rate. His curveball is ridiculously good. Opponents hit .132 off the pitch and slugged .171.

The Cubs could be wise to jump on a fastball when possible. Hitters own a .193 ISO off Bumgarner’s four-seamer this year.

Bumgarner has limited current Cubs to a .221/.281/.314 slash line. No Cubs hitter has faced Bumgarner more than lead-off man Dexter Fowler (8-for-38; four walks). Kris Bryant and Anthony Rizzo have combined to go 4-for-24 against Bumgarner with no extra-base hits in 28 plate appearances.

On the other side, Ben Zobrist is 6-for-12 against Bumgarner with a double, triple and walk. Jason Heyward is 5-for-18 with five RBI. Heyward and Ross are the only Cubs on the playoff roster with home runs off Bumgarner in their careers.

Bumgarner is 2-3 with a 3.71 ERA in seven home playoff starts. The Giants have won four of the seven, but Bumgarner has allowed 18 earned runs and five home runs in 43.2 innings. The whiffs (39 K, 22.4 K%) and control (8 BB, 4.6 BB%) are still there, but batters have been more successful putting the ball in play – and even over the fence.

Bumgarner was hit hardest during his first two home playoff starts in 2012. He allowed four runs on seven hits in 4.1 innings against the Reds in a 9-0 loss. Joey Votto went 3-for-4 with two runs and Ryan Ludwick added two hits, including a homer. He was touched up by the Cardinals in Game One of the NLCS, where he gave up six runs on eight hits in 3.2 innings in a 6-4 Giants loss.  Everyone in the Cardinals starting lineup except for first baseman Allen Craig and pitcher Lance Lynn collected at least one hit. David Freese and Carlos Beltran each had two-RBI games.

In four home postseason starts since that loss, though, Bumgarner is 2-1 with a 1.74 ERA.

Perhaps the Cubs can turn Bumgarner’s recent playoff success around tonight, and wrap up the NLDS.