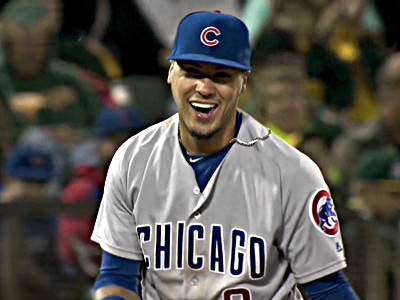 I long ago pushed the limits of the “Javy Baez defies description” line. I would say that is my own failing as a writer, but, really, it’s Javy Baez’s fault. The things this guy does almost every single night would push any reasonable wordsmith to the limit.

Even when he sets you up for a unique description by making the most incredible play you’ve ever seen that didn’t result in an out, he’s ALREADY DONE THAT, TOO.

Still, what he just did tonight on this grounder is simply not human:

JAVY. Safe or not this is ridiculous @BleacherNation #Cubs pic.twitter.com/TYmJE2yX5n

Denard Span was safe on the play, and the out call was overturned. Which kinda was a bummer, but didn’t detract from the play. The human body should not be able to move and contort that way, let alone do so while getting off an accurate throw.

Even Span had to tip his cap:

I just don’t know how he does these things, which is, of course, what makes it such a joy to watch.

And Javy can have fun with his crazy hand skills, too: