Expect the Unexpected: Javy Baez Stole Home in the NLCS Skip to content 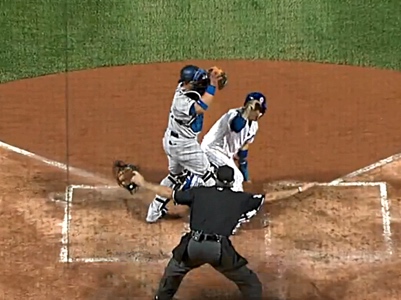 In a night laden with tremendously memorable moments (including baseball’s first postseason, pinch-hit, go-ahead grand slam – a homer that somehow compelled me to get up on the bar at Yak-Zies, shouting and cheering in blissful joy), Javy Baez did what he usually does: amaze and bewilder us.

This time, however, it wasn’t a diving play (or two) in the field or a dramatic game-winning home run. No, this time it was something much less likely, much more difficult, and, in my opinion, one of the coolest baseball plays anyone can pull off: the steal of home.

Javy Baez stepped up to the plate with no outs in the bottom of the second inning, hoping to drive in Jason Heyward (who had just tripled down the right field line) from third. But after quickly finding himself down in the count, the directive changed and his new goal was to just make contact. A flair off the end of the bat dropped into shallow, left-center field and Heyward was allowed to score. Busting it out of the box, Baez managed to make it into second base on the play.

A wild pitch later and Baez found himself standing on third with the stage set for something magical. Here it is again: Javy Baez doing his best impression of Benny “The Jet” Rodriguez:

I lost my mind. Baez is an excellent base runner and has good speed, but a straight-stealer of home, he is not. Well, to be fair, no one is. But his lightening fast decision-making (which has genuinely become one of his most marketable assets) served him well when he leaned a bit too far off of third and throw came down the line.

Javy Baez stealing home was the best baseball moment of my life so far. https://t.co/PnxIrR3q2K

Javy took off like a jet (Benny “The Jet”, even?), slid under the tag and stole home in Game One of the National League Championship Series (this is when everyone within a two foot radius of me was suddenly and mysteriously soaked in beer from my glass – I’m not sure what happened).

Miguel Montero’s late-inning heroics might be the moment from this game, but Javy Baez’s 2nd inning, eye-popping, heart-racing, beer-spilling, straight steal of home will live on forever.