Wake Up and Watch Miguel Montero Change Everything Skip to content 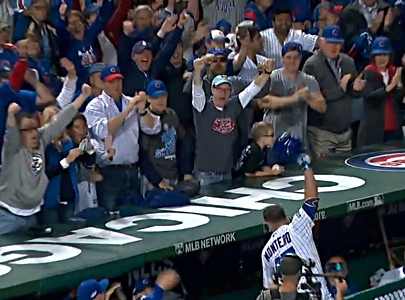 The Cubs built an early 3-0 lead against the Dodgers last night in Game One of the NLCS. Nothing is insurmountable, and a mere three-run cushion is no exception, but Cubs starter Jon Lester was cruising. It was looking like a Dodgers comeback would be nearly impossible.

But then Lester was removed from the game after the 6th inning, Cubs pitchers got in a bit of trouble, and suddenly the game was tied. And it all happened in the 8th inning – the 8th inning! Again!

By the time Miguel Montero stepped to the plate with the bases loaded and two outs in the bottom of the frame, there was already a touch of disappointment that Ben Zobrist’s leadoff double hadn’t already translated to a run. Then, when Montero quickly went down 0-2, including whiffing on a cookie, it seemed like a golden opportunity was going to be squandered, and the momentum – such as it exists – would stick with the Dodgers heading into the 9th.

That ball was not just lifted out with the help of the crazy wind at Wrigley Field, by the way. That was 105.3mph off the bat and 402 feet. And it was postseason history, as the first go-ahead, pinch-hit grand slam in the playoffs. Ever.

It was a particular special moment for a guy who has battled back issues this year (there were rumors that he might not make the NLCS roster, but so much for that, eh?), saw his playing time decrease dramatically as Willson Contreras emerged, and still found ways to contribute as a veteran and periodic starter.

After the game Montero and everyone else talked about that, and about the moment:

An in-crowd video of the grand slam, which captures the pandemonium:

And Dexter Fowler celebrated the blast with the rare, on-deck bat flip: