Julio Urias is the Youngest Postseason Starting Pitcher Ever - Will the Cubs Get to Him? Skip to content 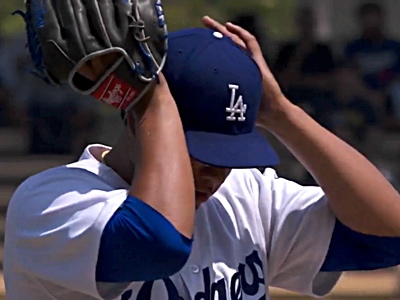 While dropping a late-inning lead might sting more in the moment, there’s something worse, something deeper, about getting completely blown out in the games that matter most.

In nearly any other type of loss, our collective fandom rarely ceases to burn brightly. But during the throes of a relative blowout like yesterday’s 6-0 affair … our (or at least, my) love for this team slowly and painfully transforms into a brightly lit “VACANCY” sign on the door of a roadside motel – I’m still open, I’m still hoping, but there’s just nothing and no one there.

But that’s not something we can allow.

So you’ll forgive me if I continue to appear chipper on this site and on Twitter, but it’s the only way to be. The Cubs are down just a single game, with four left to play (or exactly what they faced against St. Louis in the NLDS last October). In other words, it doesn’t look great, but there’s plenty of time left. Time that begins tonight against a 20-year-old lefty named Julio Urias.

If you’ve been following along, you’ll know that I’ve been previewing the Cubs’ opposing starters since the NLDS, to discern what makes them tick and how the Cubs can beat them. And while it hasn’t always worked out (Kershaw, Moore, Hill), sometimes it does (Maeda), and it’s usually pretty emotionally useful to learn that the Cubs have an angle against him. So, let’s turn our attention to another lefty, youngster Julio Urias, to see what there is to see.

Urias, if you’re unaware, made his Major League Debut as a teenager for the Dodgers earlier this season, and he’ll start tonight’s game as the youngest starting pitcher ever in the postseason. And while his first two big league starts (including one against the Cubs) didn’t go too well, he was pretty darn good in most starts after that (including another one against the Cubs).

Obviously, the numbers in his first two starts have legitimate excuses, being that he was 1) making his Major League debut, 2) at such a ridiculously young age, and 3) against two pretty good teams in the Mets and Cubs. After he was allowed to settle in, he settled down and pitched as well as many expected he could.

That said, it wasn’t like he was a lights-out pitcher for long outings all season long. Out of his 15 total starts at the Major League level, Urias never threw more than 6.0 innings in any one of them, and accomplished that feat just three times. In addition, he went fewer than 5.0 innings in 6 of his other 12 starts. While that says nothing about his ability to be a successful pitcher long-term (that much is hardly in question at all, really), it does mean a bit more for his chances at a long outing tonight against the Cubs.

Considering Urias doesn’t have much of a sample size upon which we can draw significant conclusions, let’s take a different approach of sizing him up in advance of tonight’s match-up. As I said earlier, he faced the Cubs twice this season; the first outing went the Cubs’ way, the second did not. Let’s check out the results of those starts, which Cubs performed best in each, and what changed from June to August to turn the outcome completely upside down.

Interestingly (if you’re some kind of masochist), Urias’ second start against the Cubs was likely his best start of the entire season. You can re-live it below (if you dare):

In the Cubs’ first game against Urias, the bats went off. Among the biggest contributors, you’ll find Jason Heyward (2-4, HR), Jorge Soler (2-3), and Javy Baez (2-3, HR), but each of Dexter Fowler (single), Kris Bryant (HR), Anthony Rizzo (walk), and Addison Russell (walk) reached base at least once against him.

In the Cubs’ second game against Urias, things didn’t go quite as smoothly. Fowler (walk), Bryant (single), and Rizzo (single) were able to string together enough offense for a run in the first, but Urias mostly shut them down after that – scattering four singles and a walk over the next five innings. He also, as you can see in that video above, struck eight of the twenty four batters he faced out (33.3% K-rate). Something changed from game one to game two, and we’re going figure out what it was.

I will say that the difference between a 19-year-old starters’ second MLB start and their 12th is certainly a non-zero factor, but I’d like to find something a bit more concrete to hold onto. So, (using Brooks Baseball) let’s check out his pitch mix and outcomes from start 1 to start 2.

In his first start against the Cubs Urias threw four distinct pitches (fastball, change-up, slider, curveball). Below, you’ll find the total count and number of whiffs from each pitch type, with the velocity in parenthesis:

Okay then, what do we see? Immediately, I’d like to point out that his relative pitch mix remained almost entirely unchanged. On both June 2 and August 27, Urias threw primarily fastballs, almost the same number of change-ups and sliders, and went to his curveball the least. One big, noticeable difference, however, is the lower velocity of each pitch later in the season. Whether he was wearing down in August or just a little too amped up in June is unclear, but Urias was not throwing as hard the second time around (I will note that Urias averaged just 3.2 IP/start after this outing against the Cubs).

Despite throwing just 15 more pitches in his August start, Urias was able to record seven more whiffs (15 total) than he did against the Cubs in June (8 whiffs) – without throwing harder or changing his pitch-mix. The majority of that came from his fastball, which notched six extra whiffs with just four more pitches. Perhaps the Cubs were trying a more aggressive approach against Urias the second time around, but eight strikeouts and 15 whiffs is not a very positive sign.

So what should the Cubs do differently this time around? I’m not so sure. Urias has thrown only 2.0 innings this postseason, and they came in relief. Although he didn’t allow a run, he did give up a hit and two walks. I’m not sure if his lack of innings this season and postseason (just 8.2 regular season innings after September 2) is a good sign for the Cubs to knock him out early, or if that means he’s well rested for his start tonight. But I do know that the Cubs bats are going to have to finally wake up against someone, and Urias might be the best chance they’ve had in the last few games.

[Brett: As I mentioned in the Bullets this morning, we also wanted to get into Urias’s fantastic pick-off move and how it’s totally a balk, but Joe Maddon stole our thunder. He’s on it. Brace yourself for either getting really angry this evening on a pick-off throw, or gleefully cheering as the Cubs get a free base.]
Filed to: Chicago Cubs
Latest from Bleacher Nation: