The Cubs Lost, The Cubs Can Win, and The Two Ways We Think About Things Skip to content 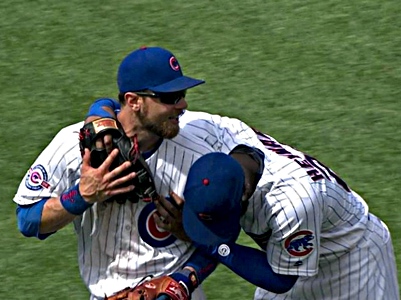 I was up until about 1am last night after the Cubs’ NLCS loss to the Dodgers, alternately engaging in my own sense of frustration, and entertaining other people’s doom boners. All the while, I knew that I was going to have to – that I was going to want to – say something about that game when I woke up in the morning, bleary-eyed and probably still fairly annoyed.

I also know that there are at least two more games to go, and one can blow his existential baseball wad so many times before it ceases to have any impact.

It probably comes off in black and while like I think it’s really easy to process games like that on two levels, experiencing the disappointment of such a damaging loss, while also placing it calmly within the broader context and avoiding irrational tangents. But it’s not easy. This morning The Wife was telling me about the plans her friend is making for an imminent World Series trip to Cleveland. “Must be nice,” I said, heat forming like blowtorches behind my eyes.

So, then, I’m of the mind that it doesn’t do anyone any good to tell them this morning that last night’s loss wasn’t a big deal. All else equal, you’d sure like to be the team that has to win only two more games before the other team wins three. The Dodgers, with last night’s win in hand and Clayton Kershaw looming for another start in this series, are sitting all kinds of pretty.

On the other hand, anybody who tells you – after having some time to let the anger out, and then step back – that this series is unequivocally over is just playing the emotional percentages. The Dodgers are more likely to win this series now than the Cubs, but the Cubs still have a chance. Obviously. Would you be convinced the Cubs were definitely going to win the series if they’d won last night’s game?

The loss was really bad. But the Cubs can still win. I have to balance these thoughts in my mind.

As for how the Cubs can actually engage that chance, well, you know the story: the hits have to come. I’m still not convinced that the offensive struggles in the playoffs are anything more than good pitching plus a lot of noise. The Cubs have been fortunate to score as many runs as they have, because there can be no arguing that they, particularly of late, have not been striking the ball well. But weak contact, even for a seven game stretch, is not always the product of a poor approach. Take last night, for example: the Cubs worked some really excellent plate appearances against Rich Hill, especially in the first four innings. It’s just that, when they got their meatball, they didn’t smack the cowhide out of it. Sometimes that happens because guys are just a tick off in their timing and rhythm; sometimes it happens because guys miss mistakes all the time, and when a bunch of those are grouped together in a stretch by random chance, our brains convince us to call it a thing.

That is, perhaps, the real cruelty of the baseball playoffs. We’re cursed with so much of what we think is knowledge about the “true” talent level of certain players and certain teams, but there will never be enough games in the postseason in which to prove it definitively. Instead, some stuff happens as an opaque, blended expression of true talent and random variance, and we’re expected to give it meaning. Because if we don’t, then what the hell was all the frustration for?

I think all we can really do is come to terms, as best we can, with this uncomfortable uncertainty. It’s not unlike the way we wake up today knowing both that last night’s loss was really, really, really bad for the Cubs, but also that this series is not over.

I’ll keep battling myself on these things all day today. Then I’ll watch the Cubs play another game tonight. As discomforted as last night’s installation made me, I know that the Cubs can win tonight and change that entire inner monologue. And then I’ll probably tell myself that was the “real” Cubs, setting myself up to begin the cycle anew the next time Anthony Rizzo pops one up with runners on base.