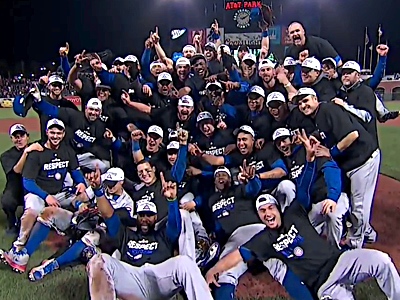 I was pacing in the room in my fraternity house when it happened. In the pre-Twitter world, it felt at most like a footnote to a game the Cubs were still assuredly going to win – something to ask friends at the bar about years later, to see if they even remember. I muttered to myself. I quickly moved on.

And most of all, of course, it’s all been horribly unfair to Steve Bartman.

That’s the last time you’ll see that name here at BN in these playoffs, and perhaps ever, so long as that’s what he wants. A fan did what fans do in almost every game of every season since 1915, when the idea of allowing fans to keep foul balls as a souvenir was invented at none other than Wrigley Field. You cannot argue that it hasn’t become a historically important sports moment, and I won’t eviscerate anyone who brings it up. But I don’t think there are any additional interesting depths to plumb.

This playoff run is not about him. This Game Six is not that Game Six. There is no metaphysical hand, extended just enough, to disrupt what the Cubs do or do not do on Saturday. To write fancifully otherwise is to extend the unfairness that began the moment an anonymous fan was given a name.

History has its place. It is a story we tell to feel connected to each other. This team – and the Game Six of the NLCS that we all now get to share – is telling its own story. Let it.

The 2016 Chicago Cubs are one win away from heading to the World Series for the first time in 71 years. They’ll have two cracks at it this weekend at Wrigley Field, starting tomorrow against Clayton Kershaw. I’m pretty freaking excited to see what happens.

A few years ago, I wrote in more detail about that 2003 game, that season, and mortality. If you’ll permit me to say, it is among the better things I’ve ever written. So, if you want more, give it a read.