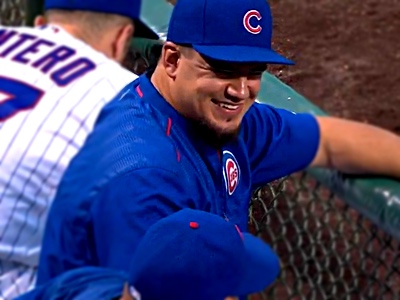 After a surprising reveal on Saturday that Kyle Schwarber, six months removed from a devastating knee injury, was medically cleared to play in baseball games and would participate in the Arizona Fall League, we’ve been wondering for days if it was really going to happen. Would the Chicago Cubs really put him on the World Series roster after having missed all but the first two and a half games of the regular season? Would they deem Schwarber that ready to contribute right away that he could be thrust into a critical role in the team’s first World Series in 71 years?

Hear Kyle Schwarber will be in Cleveland tonight & is expected to be on World Series roster. Already crazy media madhouse turned up a notch

Kyle Schwarber en route to Cleveland now on a private jet. He's expected to DH for the #Cubs in Game 1. @MLB @MLBNetwork

barring something unforeseen, kyle schwarber is expected to be activated for the WS to be cubs DH. https://t.co/4iuj4gbQkp

The roster will officially be announced tomorrow, but you can now expect that Kyle Schwarber WILL be on it. As if this World Series needed any more drama, right?

But, hey, if Schwarber wants to hit a home run at some point during the series (it doesn’t even have to be a decisive homer for us to lose our minds), that would be the most incredible exclamation point I can think of for this season – well, other than the Cubs, you know, doing the thing.

The Cubs may well go back down to 11 pitchers, given the interleague play involved in four of the seven World Series games, so Schwarber, limited as he may be, would not necessarily be restricting the Cubs offensively.

Things must have gone well for Schwarber in his second AFL game today. There was video of his at bats available, and he did seem to be hitting the ball very hard. He also had a chance to run one out to second base after a hard grounder got by the first baseman:

As you can see, he’s taking it very easy on the running, as he should. Whether he takes it that easy in the World Series remains to be seen, but he doesn’t have to be a speed burner to have a huge impact with his bat. Again: the doctors wouldn’t have medically cleared him, and the Cubs wouldn’t be considering rostering him (let alone starting him) unless all involved felt confident that he could help the team and not hurt himself in the process.

All of this is not just a fan-service, excitement-generating ploy, by the way. Not only is about Schwarber’s ability to help the team win some baseball games (remember his record-breaking postseason in 2015?), but it’s about honoring the extreme effort and commitment of a player who has earned this opportunity. It’s also for his teammates, who see him busting his butt every day to get back. Good for you, Kyle Schwarber.