Trevor Bauer, His Curveball, and Chances Against the Chicago Cubs Skip to content 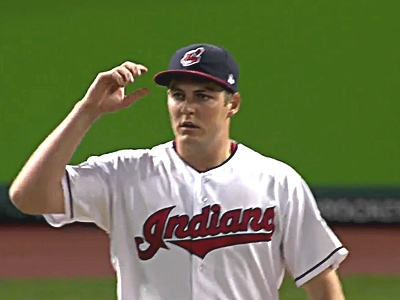 The Chicago Cubs couldn’t quite get past the Indians’ starter and the back-end of their bullpen in Game 1 of the World Series last night, but I have good news: they won’t face Corey Kluber and they probably won’t face Andrew Miller again tonight.*

Instead, they’ll get a recently injured and relatively beatable Trevor Bauer.

If you’ve been following along this postseason, you’ll know that I’ve been previewing each of the Cubs opposing starting pitchers throughout the playoffs, in hopes of finding that glimmer of hope in a sea of stress and curveballs.

Most recently, I took a look at Corey Kluber, hoping that a combination of left-handed hitters and some postseason fatigue would give the Cubs a chance. Unfortunately, they were mostly baffled by his cutter and slider, which combined for nearly 30 strikes and eight whiffs alone. Shrug. The process is still worth it, and we’re going to get right back at it now with Bauer …

… who was recently injured by his toy drone. No, seriously.

After pitching in Game 1 of the ALDS (we’ll get to that in a moment), Trevor Bauer was expected to start Game 2 of the ALCS, before a freak accident with a drone left him with a sliced finger. The story has been well-circulated by now, but in case you missed it the short version is that Bauer was working on a toy drone (as we all do every day) when one of the propellers suddenly started and cut the pinky finger of his throwing hand. His Game 2 start was pushed back to Game 3, but that was apparently not enough time.

After recording just two outs in the first inning against the Blue Jays, Bauer’s finger famously dripped blood onto the ground as he stood on the mound (with a frown…d) and he was removed from the game. Like he did before Game 3 of the ALCS, however, Bauer suggested that his finger is now fine and that he’s healthy and ready to go:

To be fair, that game was all the way back on October 17, which gives him plenty of time to heal up. So because of the injury and the brevity of his most recent outing, let’s start our dissection by taking a look at his ALDS Game 1 start against the Boston Red Sox – a night in which he allowed three earned runs in just 4.2 IP.

Indeed, Bauer’s results in the first postseason performance of his career were not excellent. He allowed three earned runs on six hits (including two homers) in a relatively short outing. That said, it wasn’t all bad. Not only did Bauer walk no Red Sox (who led the Majors in OBP) and strike out six, he managed to record eleven whiffs in just 78 pitches – his four-seamer and curveball went for five a piece.

That curveball, I’m guessing, is the key.

But before we get to that, let’s take a look at his short history in MLB. After multiple years as top prospect with the Arizona Diamondbacks, Bauer eventually made his Major League debut in 2012 – although he didn’t make more than four starts in a year until 2014 with the Indians.

So let’s take a look on his first three full professional seasons with the Indians and see what he’s done.

Okay, there’s a lot to unpack there.

From what I see, Bauer is a guy that has improved in each of his seasons, but has never achieved great results. For the most part, it seems, he is who he is: a guy with a 4.00+ ERA with the peripherals to support it. That said, a number of things do stand out.

First, his ground ball rate has increased year after year, starting with a weak 35.2% in 2014, working up to a strong 48.7% in 2016. He’s also improved his control, lowering his walk rate by exactly two percentage points, but it may have come at the expense of his strikeouts rate (which also dropped by almost exactly two percentage points from 2015 to 2016). But after reaching 190 innings pitched and lowering his FIP under 4.00, 2016 may have legitimately been Bauer’s best season. Why?

The answer does not lie his batted ball data (hard, medium, soft-hit rate), which have remained almost entirely consistent in his three full seasons at the Major League level. It’s not his K/BB ratio which has also remained surprisingly static. And it’s not his BABIP, strand rate, or even his HR/FB ratio. At a glance, then, I’m compelled to believe it’s the dramatic increase in ground balls.

As we saw in his ALDS Game 1 start against the Red Sox, that pitch can be a devastating swing-and-miss pitch, even against extremely good offensive team like the Boston Red Sox. In that start, he threw his curveball for a strike over 70% of the time. So that’ll be what the Cubs need to look out for tonight.

Otherwise, the Cubs’ traditional grinding approach to every at-bat should be suitable, as Bauer is not a guy that strikes many out and is a guy that will give up a walk from time to time. With Jake Arrieta on the mound opposite him, I like the Cubs chances tonight against Bauer.

*I know, I know, they might face Miller tonight, but I’m not sure that’s such a bad thing. The Cubs did well against Miller – when he was fresh as fresh gets – last night, making him throw nearly 50 pitches in the process. So two innings tonight is almost entirely out of the question. BUT, if he manages to get in the game, be happy that the Cubs 1) did well against him already (before he was tired) and 2) saw a whole lot of what he had to offer.