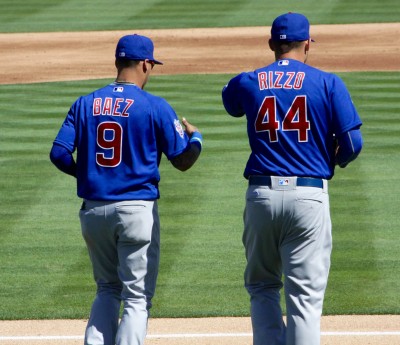 Although he was not a finalist for a Gold Glove award because he moved around so much, that didn’t stop defensive wizard Javy Baez from winning a Fielding Bible award … because they have one just for him:

Congratulations to the 2016 #FieldingBibleAward winners:

You can see more on the winners and what the awards are all about here.

This is a very much deserved win for Baez, whose defense wowed us on a nightly basis this season.

As you can see, Anthony Rizzo also won the defensive award for first base (it’s just one award at each position for all of baseball). He is very steady defensively at first base, and sprinkles in the occasional incredible play. For each of Baez and Rizzo, this is their first Fielding Bible award.

Jason Heyward was probably very close in the right field voting, but Mookie Betts blew away the field out there by Defensive Runs Saved, and generally really impressed folks defensively this year. I have no beef.

Heyward, together with Rizzo, Addison Russell, and Jake Arrieta, is a finalist for the Gold Glove award.