Josh Tomlin Starts Tonight for the Indians - Care to Know a Lot More About Him? Skip to content 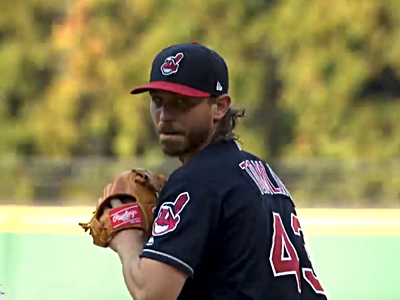 The Chicago Cubs are headed back to Wrigley Field tonight, having evened the World Series (1-1) against Trevor Bauer and the Cleveland Indians on Wednesday.

Kyle Hendricks takes the ball for the Cubs, but opposite him is another starting pitcher with whom we are not too familiar, Josh Tomlin.

So, like we’ve done with other pitchers this postseason, let’s take a deeper look into Tomlin’s history, his pitch mix, and his statistics to see if we can find that one interesting edge or angle the Cubs will be looking for (like the curveball for Trevor Bauer).

Drafted by the Indians in the 19th round of the 2006 MLB Draft, Tomlin wasn’t much of a high-profile prospect when he broke into professional baseball. He did work his way up the Minor League ladder, however, eventually making his Major League debut in 2010. Unfortunately, not two years later, he was scheduled for Tommy John surgery, which cost him nearly all of his 2013 season. Given the quiet start to his career (capped off by TJS), we’re going to focus on 2014-2016 in our analysis below.

Although he tossed a couple innings in relief near the end of the 2013 season, 2014 was Tomlin’s first full year back from injury – although, he wasn’t actually called up until a month into the season. Ultimately, he threw just 104.0 innings that year. In fact, failing to record a full-season’s worth of big league innings has followed Tomlin throughout his career, up to and including 2016:

The 174.0 innings he pitched during the regular season this year, then, were the most of his career. Of course, he’s already added an additional 10.2 IP thanks to the postseason, so he is well-above the highest inning total of his career.

Although I openly wondered (incorrectly) whether fatigue would hurt Corey Kluber in Game 1 of the World Series, Tomlin is an entirely different case. Kluber had eclipsed the 200 IP mark three years in a row, but was just reaching the highest single season total of his career thanks to the playoffs. Tomlin, on the other hand, had already tossed more innings than he ever had (before October started), and is quickly approaching 200 for the first time in his career. Not having his best stuff is definitely possible, if not expected.

But what is his best stuff?

Although we don’t have a huge sample to work from, let’s take a look at his numbers from 2014-2016 to see what kind of pitcher with whom we’re dealing.

So, Tomlin is where the Indians’ current lack of starting rotation depth starts to show. He’s a fine pitcher to have at the back of your rotation, but is not exactly the guy you want to have starting Game 3 of the World Series. Injuries to Carlos Carrasco and Danny Salazar (who is now pitching out of the bullpen) really changed the dynamics of this series.

That said, what do we see on Tomlin?

Well for one, he does not walk anyone. The Cubs, if they want to do damage, are going to have to swing the bats. The good news is that if they do, they aren’t very likely to strike out. In fact, they’re quite likely to do some serious damage.

Look at his home run to fly ball ratios.

But that’s not the end of it.

Although having a high home run/fly ball ratio isn’t great, pitchers can get away with elevated numbers if they manage to limit the number of fly balls allowed. Unfortunately (for the Indians), Tomlin does not. In 2016, Tomlin’s 35.2% fly ball ratio was the 32nd highest in MLB (would have been the 10th highest in the National League). So, Tomlin 1) allows a lot of his fly balls to become home runs and, 2) allows a lot of fly balls … period.

That happens to be especially notable, given the weather forecast for tonight: wind blowing WAY OUT. Indeed, as Brett pointed out in the Bullets this morning, the Wrigley forecast is calling for 20-40 MPH winds blowing out. He has more on the what the Cubs approach should or shouldn’t be there.

So what about his playoff starts so far?

Tomlin pitched in Game 3 of the ALDS against the Red Sox and in Game 2 of the ALCS against the Blue Jays. The Indians won both games, and frankly, Tomlin did a pretty good job.

Both starts were more than serviceable, and you know the Indians would love to get that out of Tomlin tonight (especially considering Andrew Miller’s availability to gobble up a couple innings).

Like Kyle Hendricks, Tomlin doesn’t throw with much gas, but he does mix in a lot of different pitches:

He used to throw a slider as well, but hasn’t mixed it in much in the past few years. Although Tomlin reaches for his cutter the most, it’s actually his least valuable pitch (-11.3), followed by his curveball (-5.1). His fastball and change-up have been positive value pitches for the season, but at just 1.2 a piece, they’re hardly “plus.”

So the goal for the Cubs is actually quite clear. Be aggressive, because Tomlin works in the zone and doesn’t allow a ton of walks. Try to elevate the ball, but not at the expense of a good approach. And finally, be ready for the fastball and the cutter, because they’re coming in 3 out of every 4 pitches. With Kyle Hendricks on the mound opposite Tomlin, you have to like this match-up for Chicago.