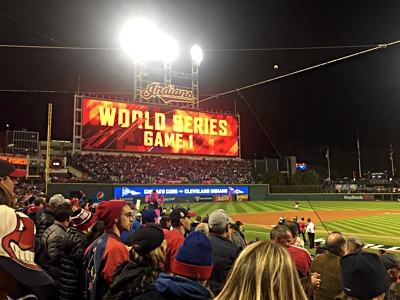 “50/50 shot I can invite you to game 1 in Cleveland. Interested in discussing?”

By a stroke of luck – and the kindness of an extremely good dude named Jeff Ullrich – I was able to secure myself a ticket to the first World Series played by the Chicago Cubs in over 70 years (I still can’t type that sentence cleanly, without my brain giving me a you sure about that, bud?).

That intro quote was the text message I received from Jeff on Saturday morning, before the Cubs had even secured their place in history against the Dodgers, to which my fingers couldn’t respond quick enough. “Yes, absolutely,” I said without considering anything else in the world. “Can I call you right now?”

After working out some stressful last minute details (thanks, Jeff!), we found a place to stay in Cleveland – about a ten feet from the stadium – and decided that we’d hit the road bright and early on Tuesday morning. But before we get to that, I want to talk about the day before the game – a.k.a. the longest day of my life.

Well how about that! pic.twitter.com/QIypR4YPur

Now, when I said that I had responded, “yes,” to Jeff’s proposition without considering anything else, I meant it. Specifically, I had no idea what I was going to do about my dog, Henry, when I was in Cleveland for a day and a half. Luckily, a friend (Danny) was able to lend a helping hand, and I was good to go. I took that picture of the Wrigley Field marquee as I was on my way to his apartment to drop off the keys to mine. All set, I thought, I’m really going. Nothing could bring me dow…

When your dog eats your lucky Cubs hat the day before you head to the World Series. pic.twitter.com/zjCXfAhlQz

Okay, now that’s a bummer. Despite the jokes that “the dog did me a favor,” by destroying that hat (you jerks), I was pretty bummed to return to that mess. I’ve worn that Cubs hat to almost every single Cubs game over the past three seasons, plus Spring Training, two Cubs conventions, and a whole lot more. I loved that hat, it’s been with me through a lot, it’s my lucky hat. Thankfully, the nice people of No Goat Tees saw the trouble I was having and reached out on Twitter:

@Michael_Cerami, send @nogoatees your mailing address and we'll replace it with a new, even luckier hat! Like this one… Fear not the Goat! pic.twitter.com/fh3VC08uZs

Okay, we’re back in business. A new hat was on the way, and I felt a lot better about losing the old one.

By the way, if you head over to NoGoatTees.com, Peter (the owner) has been kind enough to give Bleacher Nation readers 16% off on all purchases through game-time tomorrow using the code BleacherNation16. Not an ad, just an offer.

Okay, so Tuesday morning arrives, and I had slept all of three hours the night before. I hadn’t had a night riddled with this much excited anticipation since Christmas Eve 1998 (when I all I wanted was the Airgo Pogo Stick – video games weren’t that great yet). I picked Jeff up at 5:00 am sharp, and he was waiting outside, just as ready as I was; we hit the road in the cold and pitch-black darkness of a usual Chicago morning.

The stadium is visible from the highway and is just a few blocks away from the exit. Not coincidentally, so was our lodging for the evening. We found parking, unloaded our bags, checked-in, grabbed lunch, and eventually headed towards the stadium.

Tuesday night, if you were unaware, wasn’t just Game 1 of the World Series for Cleveland. It was also opening night for the Cavaliers – whose stadium is just next door – who were celebrating their 2016 NBA Championship (flag raising ceremony, etc.). So, as you can imagine, the neighborhood was FULL of Cleveland sports fans who were not particularly anxious to see me proudly wearing a big, blue Cubs jersey in their home town:

Well then. I'm not so used to being booed so ferociously.

Inside the stadium, there were plenty of kind, amicable Indians fans, outside … well, like I said, they weren’t too happy to see me. We reached the gate before the doors opened, got in line, and proceeded to head towards the stadium. It was at this point that I (foolishly) tweeted a picture of my ticket … barcode, serial number and all … to which many of you lovelies (rightfully) suggested I quickly delete until I actually made it into the stadium. Those 15 minutes were about as terrifying as any 15 minutes in my life, but no one had ruined what could have been a perfectly amazing day by stealing my spot.

After we entered the stadium, an usher offered me (and everyone else) a red #RallyTogether towel which I repeatedly denied … until he pointed out the forecast for the evening and the usefulness of having something to sit on – he was right, so I reluctantly accepted it, knowing it was going straight onto the seat.

As we ventured deeper into Progressive Field – which is quite lovely – an Indians fan caught eye of my jersey and yelled something I couldn’t stand for:

Someone just yelled at me "Portillos is overrated!"

I was so angry I couldn’t even get “No it’s not*” out correctly, but I think he got the point. But after the boos, the almost-ticket fiasco, and the slander against Portillo’s, we finally made it to our seats and I could breathe:

I’ll have to thank Jeff again for providing such unbelievably good seats. I would have been content standing in the furthest corner of the stadium, and here I was a few feet from the field … just in time for batting practice:

KB with two homers in BP (left and center) Rizzo out to Right.

You go we go. pic.twitter.com/AkrL5ZVrZB

Dexter Fowler, Kris Bryant, and Anthony Rizzo were up first, each of whom hit multiple home runs with casual swings, but it was Kyle Schwarber we were dying to see. Of course, before that happened, we got to see Javy Baez take batting practice, which is something I don’t think I’ll ever forget seeing.

Baez is the most impressive BP hitter holy cow. Couldn't even count the homers.

Now, I won’t claim to have watched a ton of guys take batting practice before, because, well, I haven’t, but Baez must have hit 10 or more balls into the stands in a matter of minutes. If you haven’t ever gone early to a game for BP, make sure you do it for Baez alone.

Finally, Schwarber stepped into the box.

He wasn’t quite as impressive as Javy, but he genuinely looked good at the plate, and that obviously carried over into both games of the World Series. I didn’t tweet much during the game, because 1) I like to watch the game when I’m actually at the stadium (especially at a moment like this) and 2) it was really hard to send tweets (the real reason).

We may not have had much to cheer over the next few hours, but it was still a remarkably electric place to be.

To be certain, the positive vibes in the stadium – despite their equal and opposite affect on me – were contagious. Here the Cubs were, down (what felt like) a kajillion runs in the most important game of my entire life, and I was smiling ear-to-ear. It was unstoppable.

The walk home from the stadium, if you can believe it, was even worse than the walk there. Even though the Cubs had just lost 6-0, the Cleveland fans saw the blue of my shirt the way a bull sees red in Spain. But hey, sports are sports, fans are fans, and it was all in good fun.

With the clock past midnight and a five-hour drive home ahead of me, I hit the pillow and went straight to sleep – disappointed, but not sad.

It's a dreary ride back to Chicago after a Game 1 loss, but only because of the weather. The Cubs are in the World Series – I'm happy.

The Cubs won Game 2 of the World Series at the same stadium the very next night, and they head back home tied 1-1. But even if they hadn’t, I still wouldn’t drop this smile. Our Cubs are playing on the biggest stage imaginable, and this alone is something to behold.

It’s a best of five from here on out, and the Cubs will not go quietly. Enjoy this, friends, we’re really watching something special.