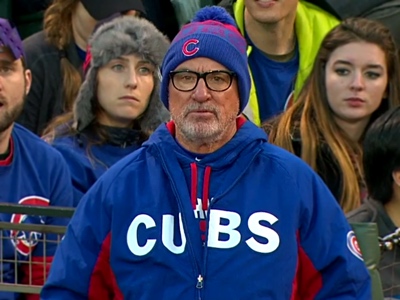 The last time time a team came back from a 2-1 deficit in a seven-game playoff series was … well, it was last week. And it was the Chicago Cubs.

You’ll recall that these Cubs, after taking the first game of the NLCS against the Dodgers, dropped two straight shutout losses to the Dodgers before winning three straight to take the series.

After last night’s frustrating shutout loss to the Indians (also the second in the series), the Cubs once again face a 2-1 deficit.

That is to say that of course the Cubs can come back to win this series. It happens, and it just happened with this very team.

But we’d be remiss not to point out some differences. On the bright side, the Cubs get the next two games at home. On the not-so-bright side, those first two games against the Dodgers came against guys not named Clayton Kershaw or Rich Hill. Tonight’s game comes against a dude named Corey Kluber, who just dominated the Cubs in the first game of this series.

… of course, we saw Kershaw do the same to the Cubs in Game Two of the NLCS and then get knocked around in Game Six. Just like the series comeback, it could happen again. Kluber will be pitching on short rest, after all, and the Cubs just saw him very recently.

How do the odds look for the Cubs in this situation? Not great, but you already knew that after losing a big swing game. FiveThirtyEight puts the Cubs at a mere 37% chance to win the series. FanGraphs is only slightly more optimistic, at 40.7%.

So, then, things don’t look great this morning.

John Lackey starts tonight for the Cubs in his first action in a good long while. It hasn’t been the best postseason for Lackey, but it’s not like he isn’t a very solid pitcher who put together many excellent starts this year. To say that he couldn’t step up and beat the Indians, while the bats do something against Kluber, would kind of be like saying the Cubs absolutely can’t lose a game at home started by Kyle Hendricks against Josh Tomlin.