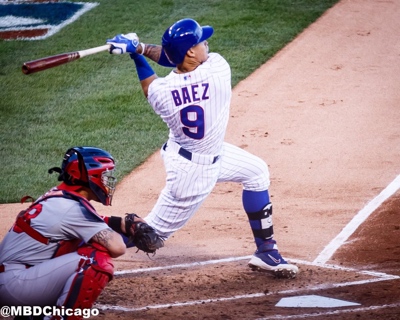 Javy Baez was the Cubs’ postseason darling through the first two rounds of the playoffs.

After recording 13 hits (including a dramatic, game-winning home run), stealing home, and making his regularly scheduled, but completely unbelievable defensive gems against the Giants and Dodgers, it was clear that Baez was going to be that guy for the Cubs this October.

Hell, he was the NLCS co-MVP and would have likely been the NLDS MVP had the distinction existed.

But the World Series has been quite different, hasn’t it? Not only has Baez stopped hitting – at least, in the way that he was in the first two series – it appears that he’s turned back into the aggressively free-swinger from seasons’ past.

But maybe there’s more to it than that. So let’s take a closer look at the hero of the NL postseason, and see if we can find out what’s what.

First, let’s take a look at the numbers from the NLDS and NLCS compared to that of the World Series. Unfortunately, the difference is pretty ugly.

The sample in the World Series is so small that, under normal circumstances, you wouldn’t actually be too worried about Baez’s production at the plate, were you strictly considering the numbers. Failing to produce much in just 21 plate appearances happens all the time to all players.

What’s troubling, however, is how he looks at the plate and why his production is so low. In just about half of the plate appearances, Baez has struck out more in the World Series (9 times) than he did in the NLDS and NLCS combined (8). He hasn’t yet walked and he has looked extremely out of sorts on more than one occasion.

In fact, his plate appearances are starting to look eerily similar to his rough 2014 debut, where he’d take a first pitch strike, and then expand his zone incredibly (and incorrectly) on the subsequent pitches. We may throw around the “he looks lost,” phrase too often, but in this case, Baez looks lost.

So what the heck is up?

Well, for one, he’s facing more right-handed starters against Cleveland (Corey Kluber, Josh Tomlin, Trevor Bauer) in the World Series than he did against the Giants who started two left-handers in four games (Madison Bumgarner and Matt Moore) and the Dodgers who started four left-handers in six games (Clayton Kershaw (twice), Rich Hill, and Julio Urias). That’s a total of six starts against left-handers in ten games. Check out his righty/lefty splits this season, and things might begin to make some more sense:

Against lefties this season, Baez is hitting 24% better than the average MLB hitter, against righties, however, he’s hitting 18% worse than the average MLB hitter. That is a huge swing. And check out his strikeout/walk rates. Against lefties, Baez is a downright contact player, who takes walk at a slightly above average clip. Against righties, however, Baez strikes out over 26% of the time, and turns every pitcher into Clayton Kershaw with his walks. As you can imagine, the same is true for his career.

And again, Baez has taken far more at-bats against righties this series, than lefties. In fact, he has had just one plate appearance against a left-hander through the entire World Series and that guy just so happens to be named Andrew Miller.

Through the first five games of the World Series, Baez has squared up against righties in 20 out of 21 plate appearances. But, let’s be honest, players typically face righties more often than not anyway, yet Baez has looked especially lost at the plate. So is there something more? Is there something about these particular righties that is giving Baez fits? I believe so.

First, let’s take a look at the list of Cleveland righties Baez has faced in the past five games.

In total, that’s 14 of 20 plate appearances against righties (check) with good curveballs (check). Care to venture a guess which pitch type gave Javy Baez the most trouble throughout the 2016 season? That’s right, curveballs (-4.0 according to FanGraphs).

With the help of Brooks Baseball, we can confirm what I think we’ve just uncovered from Baez’s time in the World Series (and against Cleveland’s pitching staff): According to the chart above, Baez swung and missed more against breaking pitches than fastballs and offspeed stuff in every game of the series (he did swing and miss against 100% of offspeed pitches he faced in game two (the yellow dot), but that was just a sample of two pitches and he saw no more of them before or after).

Clearly, Baez has struggled mightily against 1) righties and 2) breaking balls, both in the regular season and the postseason.

But we can take one more terrifying step into the weeds. For that, check out Baez’s zone profile during the World Series (again, thanks to Brooks Baseball): Usually, in these types of moments I say “Yeesh,” but that doesn’t quite do it justice, does it? Baez has swung and missed at eight of eight pitches in the bottom right corner of the chart (low and away, out of the strike zone). Combined with the two areas right next to that, he’s whiffed at 12 of 15 pitches in that area. That is an extremely exploitable, extremely terrifying outcome.

For context, and to notice the similarities, here’s the same chart for Baez for the entirety of his big league career: Even in Baez’s much-improved 2016, that lower right section was still a problem: And don’t be mistaken, Indians’ pitchers have taken notice.

According to this chart, 20.51% of all the pitches he’s faced have come in that bottom right section, and almost exactly 1 out of every 3 (32.1%) pitches have come in those three bottom right zones (again, all out of the strike zone). The Indians’ pitchers have identified Baez’s weakness and have tested it on him aggressively.

If Baez is going to return to form (whether eventually or in these next one or two games), he’s going to have to get better at hitting right-handed pitchers with good breaking balls low and away like he’s seen in this series … or, you know, just lay off them entirely.

It’s a tough battle, but at least now we know exactly what he’s up against. For everyone’s sake, let’s hope this changes soon.