Cubs Rally Together: Highlights from Today's Victory Parade and Celebration Skip to content 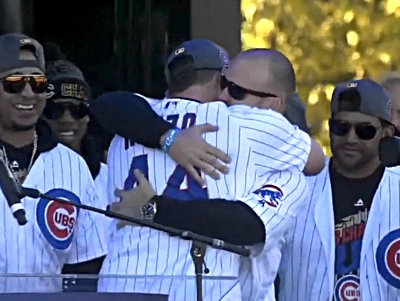 Today’s celebration in Chicago marked the culmination of a season and postseason that blessed Cubs fans with the first World Championship they’ve seen since 1908.

Clearly, it was a day many were waiting for:

Just a few folks taking in today's Cubs rally. They like this team. pic.twitter.com/RL9pz2XHi5

THEY CAME BY THE MILLIONS – Chicago's Office of Emergency Management says crowd estimate for #cubsparade #cubsrally is 5 MILLION!! #flythew pic.twitter.com/dLLzWyowVZ

The day started with the parade from Wrigley Field, and on into downtown:

It was a surreal experience. @Cubs parade caused millions of smiles. It's not just about baseball. @SBCubs pic.twitter.com/1PfghKAcom

Mile after mile of the Best fans on the planet!! Most amazing thing I've ever [email protected] pic.twitter.com/FN1c0yHSEr

Nice job by the city of Chicago to dye the Chicago River blue. Outstanding. #Cubs pic.twitter.com/8WGafnE7Q8

And, of course, the rally at Grant Park.

There were speeches at the rally, and you can see many of the videos here and here.

Two of the best moments came from Anthony Rizzo, naturally. First, he brought out the final out ball, which he’d pocketed at the end of Game Seven, and presented it to none other than Tom Ricketts:

Then, in a fitting and emotional sendoff, Rizzo introduced David Ross:

Naturally, being a Grandpa, David Ross finished his comments by taking a mass selfie:

You're beautiful Chicago! Thank you pic.twitter.com/au0aAUWYxR

Travis Wood had a good time:

Theo Epstein spoke at length about the organization:

Joe Maddon got into the many others who deserve thanks:

Tom Ricketts dropped a great conclusion to his remarks:

"How long has it been since the @Cubs won the #WorldSeries?

It was a crazy day for celebrating a crazy season. I still can’t get enough. I will continue to drink this in for as long as it keeps on coming. Happ Gets On Base a LOT, Contreras Makes History, Getting Mad for Miley, and Other Cubs Bullets

Jorge Soler Cleared the Bases … on a Groundball to Shortstop