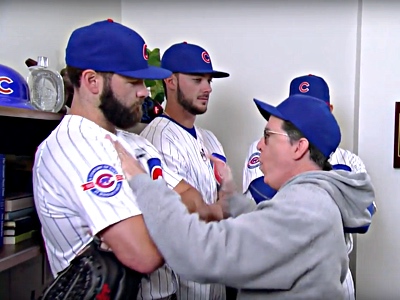 I’d really like us to have a BN shirt that commemorates the Cubs’ World Series championship. I have some ideas, but I’m not the best designer in the world. So, then, if any of you wants to take a shot at sending me a graphic idea (my first name at this website address dot com), I’d be very open to checking them out. If one gets made, I would definitely hook you up with one as a thanks, as well as the loudest and proudest of shout-outs here. Don’t kill yourself or spend a ton of time on it – I just figured there were some really proficient folks among you who could do in 5 minutes what would take me a week of frustration.

Some caveats: we can’t step on the Cubs’ name and trademarks, which is what makes it very tricky. We can use the blue, red, and white colors, but we can’t show pictures of Cubs players, or use their names, or use the Cubs’ name. I’d really like something simple, that incorporates the year 2016, the phrase “It Happened” and, perhaps much smaller, the site name “Bleacher Nation”. Even if I’m the only one who ever owns one, I just think it would be cool to have to commemorate the year here.

(That reminds me: there’s a 20% off sale at the BN store right now today and tomorrow only. Use the code SAVE20NOW when you check out.)

Made a video for the Cubs fans. "108 years in the making." @BarstoolBigCat @WaddleandSilvy @BleacherNation pic.twitter.com/r8fMSXGIuO

A bunch of new Cubs championship gear came out today at @Fanatics, and I am a fan. Check 'em out: https://t.co/Lhunitqups #ad pic.twitter.com/Xu1y8ouR52