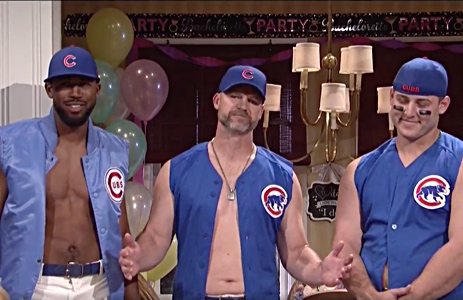 When you’re the champions of the world, everyone wants a piece of you.

So it is for the Chicago Cubs, who saw a trio of their talented players show off their skills on ‘Saturday Night Live’ last night, with Anthony Rizzo, David Ross, and Dexter Fowler signing and dancing through a couple sketches.

First, the three danced as Cubs-themed strippers for a grandma who had already passed away from shock:

Oh nothing… just some #Cubs stripping on #SNL. pic.twitter.com/M1wBeIGX2m

Meanwhile, the Cubs are playing strippers on #SNL https://t.co/4cmrVbuiD8

I can’t help but wonder if Justin Grimm and Addison Russell were disappointed not to be included in a sketch that involved dancing.

In a tamer display, the Cubs later appeared with Cubs fan and SNL alum Bill Murray to perform ‘Go Cubs Go’ as the winners of a singing competition on ‘Weekend Update’: