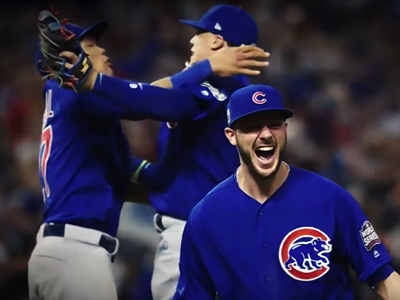 The Chicago Cubs are your 2016 World Series Champions (sick of that yet? Me either.).

But before we turn our attention entirely to the offseason and the 2017 season, I thought we could take one final statistical look back at the Cubs’ performance this October and November.

In a three-part series, I’m going to separate the Cubs into three buckets – the hitters, the starters, and the relievers – and examine everyone’s performance from a high-level perspective throughout the postseason.

With any luck, we may learn a bit more about the contributions up and down the lineup (and off the bench), during the Cubs’ most important 17 games in team history. As you can tell by the title, we’re going to start with the position players. Let’s go.

Throughout the Chicago Cubs postseason, they rostered a total of 15 different position players. There were 14 in the NLDS (Tommy La Stella was the 14th man), 13 in the NLCS (La Stella was dropped in favor of Rob Zastryzny), and 14 again in the World Series (hello Kyle Schwarber).

Although many of the players above contributed in ways outside of the batter’s box, I’m going to focus on offense for this piece. And, because of the small sample and the fact that were looking back on their performances not tying to project them going forward, I’m going to use some of the more traditional/counting statistics that directly led to Cubs’ victories. Okay? Okay.

First up, let’s take a look at which Cubs got the most chances at the dish, to see if they made the most of their opportunities:

As you can imagine, the Cubs’ most common 1 – 4 hitters (Fowler, Bryant, Rizzo, and Zobrist) received the most plate appearances throughout the series, but Schwarber did eventually hit second and disrupt that order through four games of the World Series. In addition, you’d probably prefer Addison Russell take the next most at-bats, but with the way both he and Javy Baez were swinging it through the first two rounds of October, it’s easy to see why Baez (71) just barely edged Russell (68) out.

Then again, Baez did do a lot with his increased exposure, at least through the NLDS and NLCS.

Javy Baez recorded five more hits than Russell in just three more plate appearances. Although he struggled mightily out of the gate in the World Series, it seems he did enough damage in the first two rounds to make up for it.

But what about hits for extra-bases?

Most Extra-Base Hits in 2016 Postseason:

Well then, the Cubs players with the most plate appearances recorded the most hits and extra-base hits. Some of that is a one-goes-with-the-other kind of thing, but I also think Joe Maddon has been vindicated in his daily lineups. Again, these players also got more chances, but it’s hard to argue anyone else hitting higher in the lineup, given the results.

But when we move on to homers, a few new names do finally appear.

The Chicago Cubs with the most home runs in the postseason feature two names not listed above. One is relatively expected, the other … maybe not so much. All of their homers counted though, so let’s see who the heroes were:

Most Homers in 2016 Postseason:

The Cubs hit a total of 18 home runs in the postseason, but 16 of them came from the six batters above. That said, Miguel Montero and Willson Contreras each added one of their own, both of which were arguably as impactful as many of the homers listed above.

After a slow start to the postseason, Addison Russell hit a homer in Games 4 and 5 of the NLCS and another monster one in Game 6 of the World Series. He may not have had the most hits or extra-base hits, but he sure came up at the right time.

RBI is far from a perfect stat, but in a playoff game, the fact that they happened is obviously extremely important. Look at Miguel Montero. He had just two hits in his 12 plate appearances, but they resulted in arguably 5 of the most important RBI of the postseason. Whether it’s a useful projection stat or not, driving runs in matter!

And so does scoring them!

In this case, the top of the order shines once again.

If you’re scoring a lot of runs, it usually means the guys behind you are driving you in, but it can also be an indication of how much time you spend on base or how often you get/find yourself in scoring position.

Or if you’re Javy Baez, how good you are at stealing home.

Most Stolen Base in 2016 Postseason:

The Chicago Cubs are far from a base-stealing team, but they stole eleven bases in twelve attempts, which is a fantastically successful rate. One of those stolen bases (Javy Baez) was even a steal of home. I guess if you’re going to steal, make it count.

Finally, of the players that had at least 20 plate appearances (which excludes Tommy La Stella, Albert Almora, Chris Coghlan, Miguel Montero, and Jorge Soler), you might be somewhat surprised to see the overall OPS leaders.

That’s right. The Cubs’ 39-year old, retiring, nominally-third-string catcher led the Cubs in OPS in the postseason when they wont the World Series. Following him is their 23-year old outfielder/DH who was injured and missed almost the entire season. They had far fewer plate appearances than the three guys that follow, but it’s still pretty inspiring to see them where they are.

In the end, the Cubs got contributions from just about every single person in the lineup. But, as you would have hoped, the primary production came from arguably their best three offensive performers: Dexter Fowler, Kris Bryant and Anthony Rizzo. And to be certain, Kris Bryant was at the top of his game.

He had the most hits, walks, and extra-base hits; he was tied for first in plate appearances, runs, and home runs; was third in OPS, tied for third in RBI, and finished with the fourth most stolen bases. That is a complete player. He is most likely going to be the 2016 MVP and he was very likely the Cubs Postseason MVP, as well.

From the offensive side, the Cubs held up their end of the bargain. Next, we’ll check in on the starters and see how well they did, too!

And, remember: if you want to get Cubs championship swag to celebrate what these players accomplished, head over to Fanatics and check out the huge selection of official Cubs gear. You’re supporting BN in the process, so thanks!