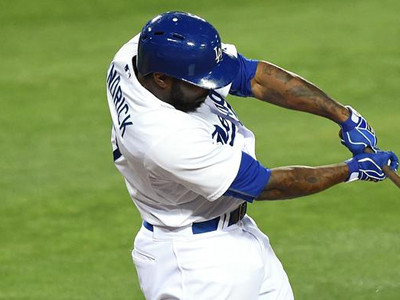 A couple transactions to note from around baseball …

The Blue Jays have reportedly signed DH Kendrys Morales to a three-year, $33 million deal. It’s an interesting move for a team that is potentially losing both of Jose Bautista and Edwin Encarnacion. And, although it’s not an enormous financial commitment and does not directly implicate the outfield, you do wonder how much ammo they still will have to go hard after Dexter Fowler, for one example, as has been rumored. Given the departing pieces from their roster, I suppose the answer is probably “plenty.”

The Blue Jays figure to continue to be among the more active teams this offseason, given their open roster spots and generally competitive state. Earlier today, they reportedly agreed to a deal with 23-year-old Cuban youngster Lourdes Gurriel Jr.

Meanwhile, the Dodgers have traded Howie Kendrick’s final year before free agency to the Phillies for Darin Ruf and Darnell Sweeney. Kendrick, 33, had a significantly down year in 2016, posting a sub-100 wRC+ for the first time since 2010. He can move around between second base and the outfield a bit, but he’s probably not going to give you great defense at either spot. Still, he could bounce back a bit, move around a bit, and overall be a nice veteran piece for a rising Phillies team.

Speaking of which: although their rebuild will continue for a little while, the Phillies could be one of those sneaky competitive teams in 2017 with a little luck. They’re young, they have resources, and they’re right there on the cusp of turning the corner. Reminds me a lot of the 2014 Cubs. It’ll be really interesting to see what they do with the rest of their offseason.

As for the Dodgers, there’s not a lot of loss here, as Kendrick was largely ineffective this past season, and was not a regular starter down the stretch. They clear some payroll, though.