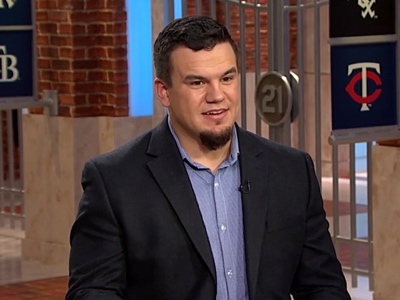 It wouldn’t be accurate to say that Kyle Schwarber was *THE* Cubs World Series hero, given that there were so many guys who stepped up huge (David Ross, Jon Lester, Ben Zobrist among them). But it would definitely be accurate to say that Schwarber was one of the Cubs’ best offensive performers in the World Series, and was *THE* best sub-plot to the best story in baseball.

For that reason, his incredible return from a catastrophic knee injury and his fantastic performance, it should be no surprise that everyone wants a piece of this guy. In the last few days, Schwarber has made a number of TV appearances, and you can watch them below.

Schwarber was on ‘MLB Now’ to discuss, among the usual stuff, what he learned by watching Joey Votto growing up (yes, Schwarber is young), the things he watches out for in his swing, the aftermath of his knee injury, and much more:

Did you catch the story about the injury? Schwarber says he first thought his ankle was broken, because it was hurting so badly, and the knee didn’t feel all that bad. So when doctors performed the initial x-ray and saw no break, there was a lot of relief – that’s probably why there was the infamous first report of his injury being a sprained ankle. It’s because Schwarber, himself, didn’t realize how badly his knee was injured, and was focused more on the ankle. It wasn’t until later that night that his knee “blew up like a balloon” that he knew it was not good.

Schwarber was on ‘Live with Kelly’ yesterday morning, together with Kelly Ripa and Alex Rodriguez, who was co-hosting:

Schwarber also took some hacks out on the street, and Kelly’s first pitch plunked him:

Schwarber was also on ‘High Heat’ with Chris Russo, discussing his injury, the comeback, and the postseason: