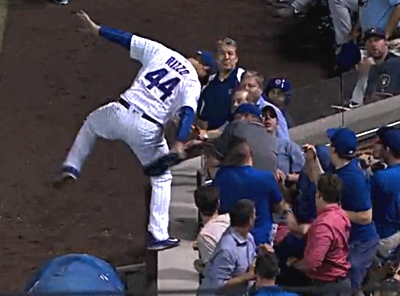 Well here’s a nice, but fairly unusual bit of news: Anthony Rizzo has been awarded with the 2016 Rawlings Platinum Glove award. If you’re unfamiliar with the award, think of it as one step above winning the Gold Glove.

Unlike the annual Gold Glove awards, which are handed out to the best defender at every position around the diamond (Rizzo and Jason Heyward were winners this year) – the Platinum Glove award is given to the single best defender of any position in each league.

With all due love and respect to Anthony Rizzo (who was a legitimately awesome defender at first base (undoubtedly worth of his Gold Glove victory)), you’re right to wonder how unusual it is to hand the award out to a first baseman. Indeed, Rizzo has become the first first baseman to win the award in its short history:

Since its inception in 2011, twelve Platinum Gloves have been handed out, but only to six different players and five different positions. Before Rizzo’s win at first, four awards had been given to catchers, three to third basemen, one to center field, one to left field and one to a shortstop. Aside from Alex Gordon in left field, all of the winners came from premium defensive spots (and to be fair, Gordon is/was like the Jason Heyward of left field).

(Again, that’s not Rizzo’s fault, because it’s the nature of first base, relative to the other positions. I love you, Tony. I’m just trying to show that I’m aware of how unusual this is. Had a Cardinals first baseman won the award, we’d have been just as surprised).

To be certain, the Platinum Glove was awarded based on a formula combining the Society of Baseball Research’s SABR Defensive Index and fan voting. Rizzo, in case you were unaware, is pretty popular among the fans.

The Cubs have assembled quite the collection of hardware here in 2016, but they’re not done yet. The other big awards (Rookie of the Year, Manager of the Year, Cy Young, MVP) will be announced throughout the week, and the Cubs have a good shot of growing their collection.