BOOM: Kris Bryant is the 2016 NL MVP Skip to content 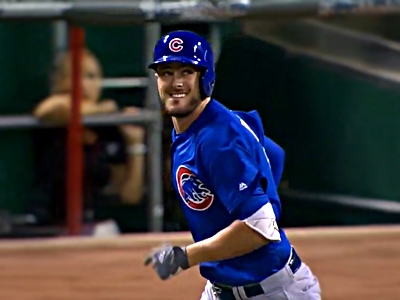 College Player of the Year.

Minor League Player of the Year.

Rookie of the Year.

They will have to invent another award to supersede MVP next year just so that Kris Bryant’s ascension can continue at an appropriate and deserving pace.

Tonight, MLB and the BBWAA confirmed what we’ve long expected: Kris Bryant was the most valuable player in the National League this season.

Bryant, who was the NL Rookie of the Year last year, already claimed the Hank Aaron award for the NL’s best offensive player. Bryant slashed .292/.385/.554 this year, with 39 home runs, 121 runs scored, and 102 RBI. Throw in his defensive value and versatility, his excellent base running, and the fact that he played on a “winner” (something that matters to many voters (even though the level of an individual player’s value should have absolutely no relationship to that of his teammates, but whateves)), and this was a foregone conclusion.

Bryant was not a unanimous winner, however, because one voter voted for Daniel Murphy:

I voted Murphy first, Bryant second … so sue me.

Bryant was worth 8.4 WAR this year, second only to Mike Trout’s 9.4. Corey Seager was nearly a full win lower than Bryant.

And, of course, Bryant capped off his incredible season by making the final out in the final game of the Cubs’ first World Series run in 108 years. He did it with a smile on his face, and I bet he’s smiling tonight, too:

Check out the smile on @KrisBryant_23. Little League alum still having fun in #game7 of the #WoldSeries! https://t.co/EWUy8VTaiE