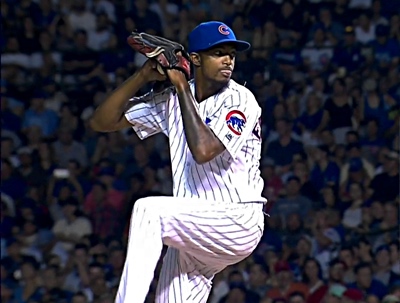 What a year it was for the Cubs, eh? Even if you set aside the obvious (WORLD CHAMPIONS!), there were so many bright spots.

Some of those bright spots were expected (a huge season from Kris Bryant), some were less expected, but slightly plausible (Kyle Hendricks’ brilliant breakout), while some others were not entirely expected (the emergence of Carl Edwards Jr.).

Despite a very rough go of it in Triple-A Iowa (4.26 ERA, 15.5% walk rate), the Cubs called up Edwards to fill in out of the pen at midseason. And, almost immediately, he began to turn things around. By the time his regular season was over, Edwards had posted a 3.75 ERA (albeit with MUCH better peripherals: 2.87 FIP, 2.40 xFIP), while rocking a truly elite 37.7 strikeout rate and a more manageable 10.1% walk rate. He was also incredible hard to square up, posting a 25.0% soft contact rate that was right up there with the king of soft contact, his teammate Kyle Hendricks (25.1%).

In just 36.1 innings, Edwards went from an unpredictable, relatively wild Minor League reliever, to a strike-throwing must-have option on the postseason roster, one who Joe Maddon clearly trusted in tight spots. So what gives?

Well, FanGraphs’ Eno Sarris thinks he may have found at least one part of the answer in a place we’ve looked before: an elite spin rate – and this is your must-read for the day (it was actually an “of the day” a few weeks ago, but other urgent matters pushed it back until now … so now it’s today’s, you know, of the day).

In search of a reason for Edwards’ resounding success, Sarris discovered the spin rate on his fastball – which, according to Statcast, is second best in all of baseball. That late life you see on Edwards’ fastball? I could be because of that spin rate.

Here’s how the leader board shakes out for pitchers with over 400 pitches in 2016:

Obviously, some names on the list are better than others, but that is certainly some nice company. Sarris goes onto explain that Edwards’ four-seamer also has some of the least amount of movement in all of baseball (and to the cut side) – which, by comparison to other pitches, makes it unusual, and thus difficult to hit.

It really is a great dive and an interesting take on an up-and-coming Cubs pitcher, and a topic that we’ve said is going to be a big one heading into next year. So, do yourself a favor, and take a peek at Edwards’ unusually high spin rate. Given the recomposition of the Cubs’ bullpen in coming months, it’s entirely possible Edwards’ role could be even more important in 2017.