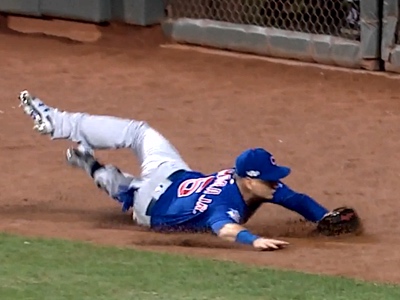 The Chicago Cubs are an extremely good baseball team and organization, but they’ve undoubtedly gotten quite lucky.

Free agents and established players aside, the Cubs have gotten a ridiculous volume of positive contributions from young, rookie players, who started off even hotter than you might have projected for top youngsters.

Consider that each of Anthony Rizzo, Kris Bryant, Kyle Schwarber, Addison Russell, Willson Contreras, and Kyle Hendricks pretty much hit the ground running, while Javy Baez, Jorge Soler, and Carl Edwards Jr. (each with some flaws) were not too far behind. The players, of course, deserve the bulk of the credit for their success (some of them are just freaks, in the best possible way), but this kind of thing just doesn’t happen for most teams, certainly not with the kind of uniformity the Cubs have seen in the last few years.

But that luck probably won’t last forever. In fact, the extent to which these rookies have succeeded immediately upon reaching the Majors is already unbelievable. To that end, I bring up young outfielder Albert Almora Jr.

The Chicago Cubs seem to have an opening in center field for 2017, and yet another top prospect (Almora) waiting for his chance to take flight. Almora projects to be an elite defensive outfielder, whose bat should eventually be at least league average, with some upside on top of that. In limited duty in 2016, Almora slashed .277/.308/.455 in the big leagues, and played his characteristically stellar defense.

But will he really get handed a starting job just like that in 2017? I’m not so sure, and neither are the Cubs.

At Cubs.com, Carrie Muskat recently caught up with Cubs President of Baseball Operations Theo Epstein, to discuss the near-future of the organization, particularly in the outfield.

In 2017, Epstein envisions an improved offensive performance from Jason Heyward in right field, and a much larger contribution from a healthy Kyle Schwarber in left. Eventually, the conversation shifted towards center field, where Dexter Fowler is set to leave in for free agency. With that in mind, Muskat questioned whether Almora will be given an opportunity to replace Fowler in center, and Epstein wouldn’t rule it out.

That said, he suggested that the Cubs might be more likely to acquire someone “to complement him [Almora] and allow him to grow into the job more gradually.” Other rumors have indicated something similar about the Cubs’ plans. Which works towards my original point: most top young prospects aren’t immediate successes like a number of the Cubs listed in the introduction. Most enter the league slowly, and in small doses, before getting their feet on the ground and taking on bigger roles as they age. Development is not linear, and all of that.

Consider for a moment that Albert Almora Jr. is only 22.5 years old.

According to FanGraphs, 22.4 is the average age of a player in High-A. Almora, on the other hand, has already made multiple postseason rosters, and even scored the lead-taking run in Game 7 of the World Series.

Point being, even if you’re slightly disappointed to hear that the Cubs won’t allow Almora to take on the bulk of the duties in center field immediately, you shouldn’t be any less excited for his future. In all likelihood, Almora wasn’t going to have the type of immediate breakout success as some of his teammates in 2017 (at least not with the bat), making the slow-and-steady strategy the best thing for his development.

Of course, there’s also the fact that the Cubs want to be competitive and have several other guys that could get in his way.

Jorge Soler still exists, for example, and can contribute in very meaningful ways with his bat. Kyle Schwarber will also be returning for a full and expectedly productive season, and Ben Zobrist may even be pushed out to the outfield on a regular basis if Javy Baez steps up and takes over second base permanently like he did throughout October. All in all, the Cubs could have up to five starting-caliber players to accommodate in the outfield.

There is also still Matt Szczur, who, although he may not be a regular starter, could still contribute as part of a rotation.

Even if the Cubs don’t acquire anyone else to complement Almora in center then, the Cubs outfield already looks crowded (in the best way possible). There’s two lefties, two righties, and a switch-hitter. Plenty of power, and two Gold Glove-caliber defenders. Two can play all over, and the other three will be relegated to the corners. In short, versatility and options abound. It’s quite possible (especially with Joe Maddon at the helm) that even the more established players will face irregular or unpredictable playing time.

With a full season of Kyle Schwarber, Jorge Soler, and Ben Zobrist in the outfield, Jason Heyward might play way more center field than he did in 2016 (which was the plan before Dexter Fowler made a surprise return in Spring Training). In fact, wouldn’t some combination of Almora (righty) and Heyward (lefty) in center field, Zobrist splitting time between second base and the corners, and Kyle Schwarber/Jorge Soler splitting time between the remaining corners be an enviable mix?

That would allow Heyward (who struggled offensively) and Almora (who’s offense may not quite yet be ready for full-time duty) to continue contributing with their glove, while easing back into the offensive side of the game with favorable match-ups. It would allow Ben Zobrist’s excellent bat to stay in the lineup on a more regular basis, while providing Baez with more opportunities at second (or third base on the occasion that Kris Bryant needs a rest or slides into the outfield). And it would provide each of Kyle Schwarber and Jorge Soler a less demanding reintroduction back into the regular season, after both had injury-filled years in 2016.

So, as much as I love Almora (and I do!), I don’t think the Cubs should necessarily plan to “hand him” the job in center field. He, along with a mix of 4-5 other outfield options, should share time to produce the best bottom line outfield in baseball.

If, then, after the 2017 season (or sooner), Almora looks like a sure-fire center fielder, the Cubs can send him out there at the ripe old age of 23/24 for the foreseeable future. In other words, a short dosage exposure might be best for him and the Cubs both in 2017 and beyond.

For more on what the Cubs may or may not do in center field next year, read Brett’s thoughts on a reunion with outgoing center fielder, Dexter Fowler.